And now here's the companion piece to the first part of my election analysis, which discussed the turnout changes for the last 4 large statewide elections from 2004 to 2010. This time, instead of going over HOW MANY people vote, we'll look to see who they VOTED FOR in these elections, and to see which areas would be harbingers for a Barrett or Walker win.

To give you an example of how certain places swing from one election to the other, check out Craig Gilbert's excellent article from 2011, showing the votes for president in 2008 and governor in 2010 in every Senate district in Wisconsin. From that, we can analyze the districts that had the largest swings from Democrat to Republican in the state between the 2 elections. Statewide this swing was +19.68 GOP, going from Obama +13.91 to Walker +5.77.

So it looks like the areas that Barrett could see the largest swings back into his direction would be up the northeast Wisconsin coast, on and along Hwy. 51 from Stevens Point all the way up North, and in SW Wisconsin. Remember, a 6-point swing statewide with the same turnout gives Barrett the election, so if Barrett could grab half of this swing in these areas, that would pretty much do it. It would also help Kristin Dexter and Donna Seidel in the Senate recall districts of 23 and 29, as both of these districts went for Walker by 13-16 points, but also went for Obama by significant margins as well.

By comparison, look at the places that changed very little from 2008 to 2010, and you'll see a commonality.

All in the Madison and Milwaukee areas, which means that the bigger benefit here for both the GOP and (especially) the Dems is to maximize turnout and run up total votes instead of changing the minds of those who do.

Let's go back to the swings, and do a bit of math to see how much of the voters would have to swing back to Barrett in order for Tom to become governor. This is assuming the same proportion of votes come from these districts as they did in 2010 (this is a bit different than what I measured in part 1, which indicates that increased turnout alone should help Barrett). I'll define this as a "springback", which would be a percentage of the swing that went from Obama to Walker in 2010. For example, if the swing in a district was 20% in 2010, say from Obama +10 to Walker +10, a 25% springback would be 5% back toward Barrett in the recall election (or 1/4 of 20%), which would be make the result Walker +5 in this district. Voter turnout also matters in these districts, as a high-turnout district will mean more votes, as will a high-swing district.

But some places are swingier with more turnout than others, so let's look and see where the Barrett Administration would get the best payback from getting a portion of the electorate to spring back. And the places appear to be in mostly red territory.

The number of the side is the margin that would swing to Barrett in each district, and the number on the bottom is the State Senate district that the change would take place in. (click to make bigger) 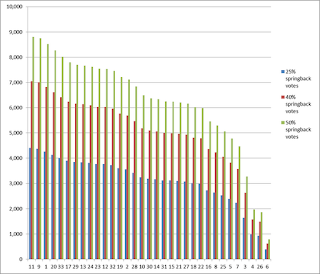 In other words, the places with the biggest payoffs in switching voters back for Barrett, and the places Walker needs to defend are-

And right after that are 3 Senate recall districts (Seidel/Petrowski, Moulton/Dexter, and Fitz/Compas!) as well as college town Stevens Point. All of these are useful territory for Barrett to try to make up.

So with this analysis, the key swinging area codes are 920 and 715, and Walker will have to defend his huge margins in the reddest of the red districts in the 262. Even if Barrett only gets a third of the votes in those 262 districts, it wuld probably be enough for him to win. For the 608 and 414, Barrett needs turnout (and Walker needs to prevent it), as those districts are less likely to change who they vote for, and their low turnouts make it doubly less worthwhile to convince people of one candidate vs. another.

Let's also look at the areas that seem to tell you what the final vote will be statewide. The most "bellweather" districts would be the ones that most closely match the results for both the 2008 and 2010 elections. Here's who seem to fit the bill.

Very different districts than above, except for the Wangaard- Lehman showdown in the Racine area, (which helps explain why that race and the voting around it is so big, it could decide the Senate and Guv races). And it also illustrates a Dem opportunity, as Part 1 pointed out that Kenosha County is an area that has a huge bump in turnout in presidential year elections, and with the turnout expected to be high on Tuesday, Kenosha would seem to be a place to reflect that. Seems like Kenosha is a key place to watch on Tuesday with these two factors in mind.

So there you go. It's a long, geeky analysis, but I think it'll give you some things to look for. And chances are that your vote will matter greatly, either due to helping "run up the score" in turnout, or in helping to swing (or not swing) certain parts of the state back toward its 2008 levels. So GET YOUR ASS OUT TO THE POLLS ON JUNE 5 and cast that vote!