Getting back to normal with a tepid July jobs report

I figured things might settle down in this month's Wisconsin jobs report after three straight months with changes of more than 10,000 jobs. And it turned out I was right, as the state gained 2,000 jobs on a seasonally-adjusted basis for July, and 1,800 in the private sector. Granted, you have to do a lot of searching through the DWD's convoluted release, but that's the bottom line- a largely stagnant report, with unemployment also staying level at 6.8% for the month as well.

Going inside the numbers, it look like the big gainer is in the Transportation, Warehousing and Utilities sector, which had a "gain" of 2,600 jobs that seems mostly related to lower than normal July layoffs (they lost 300 in the unadjusted survey). The big loser? The seasonally-related Leisure and Hospitality, which "lost" 2,600 jobs despite adding 2,300 in the unadjusted survey.

So let's look at the last 5 months, now that things have gotten back to normal after the cold Spring delayed seasonal hiring, and explained some of the major swings we saw.

That number's not so good over 5 months, and as you can see, it's meant that the Walker jobs gap has grown again, now nearing 53,000 private sector jobs, and 48,700 overall. 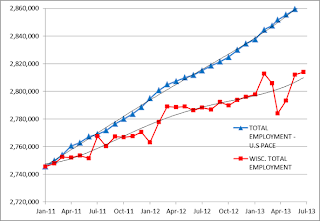 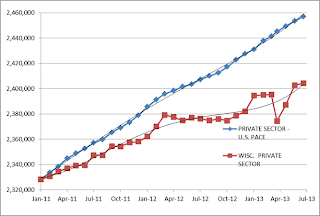 Also released by the DWD were the numbers the state sent to the BLS for the Quarterly Census on Employment and Wages (QCEW), the "more complete" report that gets a lot of hype when the national report comes out every three months. These figures include a bad stretch of job numbers in Fitzwalkerstan, as the end of Q1 2013 only had an increase of 24,124 private sector jobs compared to the end of Q1 2012. 2,000 jobs a month adds up to less than 100,000 jobs in 4 years, which sure ain't 250,000.

In fact, 24,000 private sector jobs is barely over 1.0%, in a time when private sector job growth in the country was around 1.9%. As this next chart shows, the year-over-year increase in private-sector jobs in Wisconsin has continued to be on a downward trend, since peaking in March 2011- the month Act 10 was passed into law. 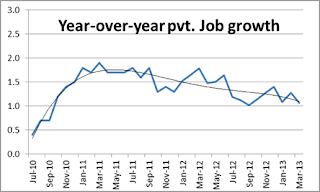 And the raw numbers show a drop of more than 40% in jobs compared to the Act 10 month of March 2011, with this trend also going in the wrong direction. 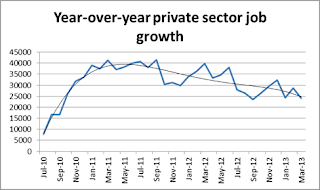 Now in the 4 months in between the March QCEW report and today, the state's added a little over 2,000 private sector jobs a month instead of flatlining like it did between March and June 2012, so I'd guess June's QCEW report may look a bit better. But it's still well below the national trend, and I'd anticipate Wisconsin to continue to lag the nation in the jobs department. In fact, once the seasonal jobs from May and June go away in the next 2 months, we may be back to sucking once again.
Posted by Jake formerly of the LP at 5:34:00 PM