As a former Indiana public school teacher, I have been watching with great interest on the saga of former Indiana Schools Superintendent Tony Bennett. And I'm sure this will stun you, but it has to do with pro-corporate education "reformers" giving preferential treatment to private schools (and the campaign donors that head them) over public schools.

Indiana has "reformed" its K-12 funding in recent years to allow for some funds to go to private and charter schools, and some of that aid is tied into test scores and evaluations from the Indiana Department of Education. If this sounds familiar, it should, because the Bradley Boys in Wisconsin want to put in a similar "performance-based" system here, and the increase in voucher schools is a part of this, as it's done under the veneer of "competition" for public schools.

Well this week, it's come to light that the evaluations in Indiana weren't exactly on a level playing field.

Emails obtained by The Associated Press show Bennett and his staff scrambled last fall to ensure influential donor Christel DeHaan’s school received an “A,” despite poor test scores in algebra that initially earned it a “C.”

“They need to understand that anything less than an A for Christel House compromises all of our accountability work,” Bennett wrote in a Sept. 12 email to then-chief of staff Heather Neal, who is now Gov. Mike Pence’s chief lobbyist.

The emails, which also show Bennett discussed with staff the legality of changing just DeHaan’s grade, raise unsettling questions about the validity of a grading system that has broad implications. Indiana uses the A-F grades to determine which schools get taken over by the state and whether students seeking state-funded vouchers to attend private school need to first spend a year in public school. They also help determine how much state funding schools receive.

Well, why did GOPs like Bennett and Neal care so much about Christel House in particular? Yep, you already know this answer.

However, the emails clearly show Bennett’s staff was intensely focused on Christel House, whose founder has given more than $2.8 million to Republicans since 1998, including $130,000 to Bennett and thousands more to state legislative leaders ....

Bennett consistently cited Christel House as a top-performing school as he secured support for the measure from business groups and lawmakers, including House Speaker Brian Bosma and Senate President Pro Tem David Long.

But trouble loomed when Indiana’s then-grading director, Jon Gubera, first alerted Bennett on Sept. 12 that the Christel House Academy had scored less than an A.

Neal fired back a few minutes later, “Oh, crap. We cannot release until this is resolved.”

A weeklong behind-the-scenes scramble ensued among Bennett, assistant superintendent Dale Chu, Gubera, Neal and other top staff at the Indiana Department of Education. They examined ways to lift Christel House from a “C” to an “A,” including adjusting the presentation of color charts to make a high “B” look like an “A” and changing the grade just for Christel House.

But maybe Bennett was just doing this because he wants all schools to be seen as succeeding in Indiana? Uh, not really, as the Indianapolis Star revealed this week that 2 Indianapolis Public Schools didn't get the Christel House treatment, got labeled as "failing", and were taken over by the state.

Two Indianapolis Public Schools might never have been taken over by the state if then-Superintendent of Public Instruction Tony Bennett had offered the district the same flexibility he granted a year later to the Christel House Academy charter school.

The issue was similar in both cases. Christel House had recently added ninth and 10th grades, and IPS’ Howe and Arlington had added middle school grades. The students who filled those seats posted poor enough scores to drag down the schools’ overall ratings...

Gee, you think Tony Bennett, a guy who was part George Bush's pro-voucher Chiefs for Change, might be OK with giving failing grades to public schools to show they "don't work" and use it as an excuse to throw more funds to private schools? OF COURSE HE WOULD.

And it gets even better. After Bennett was kicked to the curb this November in favor of Glenda Ritz (in no small part due to Hoosier teachers rallying against Bennett's favoritism and anti-public school mentality), he did what many Republican stink tank types do - grifted to a new opportunity. He got appointed to be Gov. Rick Scott's Superintendent of Schools in Florida, and he wasn't the only one in his family that got paid out of the deal.

In June of 2011, Tony Bennett, then Indiana’s superintendent of public instruction, picked a for-profit education company in Florida to run a group of Indianapolis public schools.

The company, Charter Schools USA, set up operations in Indianapolis soon after the announcement and officially began running Manual High School, T.C. Howe High School and Emma Donnan middle school in the late summer of 2012. Millions of Indiana tax dollars have since flowed to the company, which has received many good reviews for its work in Indianapolis.

But a recent hiring decision by Charter Schools USA is sure to raise eyebrows and questions about conflicts of interest, particularly now that Bennett is embroiled in a massive controversy centering on special treatment given to certain Indiana schools during his tenure.

The decision: Charter Schools USA earlier this year hired Tony Bennett’s wife, Tina, as a regional director based in Florida, where Tony Bennett was hired late last year as commissioner of education. And, so, the bottom line is this: Tina Bennett is now earning a paycheck from the company her husband hand-picked to take over schools in Indiana, a decision that was very good for the company’s financial fortunes.

No payback there, right? Bennett gives a contract to Charter Schools USA, then allows Howe and other schools be listed as "failing" even though they wouldn't have to be, and then Howe is taken over by...Charter Schools USA. And when Dr. Tony moves to Florida, his wife lands a well-paying gig at the company that's raking in big bucks from Tony's contract (total coincidence, I'm sure). 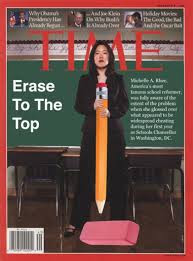 But we shouldn't be surprised that such sleaziness follows school privatization policies. I've already mentioned other egregious examples of cheating and rigging this system, including the Atlanta cheating scandal and the Michelle Rhee-condoned "erase to the top" changing of test answers in Washington D.C.

What it proves yet again is that tying state aid and teacher pay to incentives such as test scores inevitably leads to some who will try to cut corners to get paid more. It's not unlike MLB and PEDs or Wall Street hedge funders, if there's a lot of money on the table and no major penalties for breaking the rules, some will look to unethical means to improve their performance.

And if there aren't strong teacher's unions to back up teachers who blow the whistle on these corrupt practices, then the cheating will be more likely to slip by, at the detriment of the majority of districts and teachers that do things the right way. This is often why high-stakes testing in schools and the busting of unions go hand-in-hand, because it reduces a check on the power of corrupt administrators and elected officials that may have an agenda well beyond education.

Just because Tony Bennett is a special kind of lying crook (he even admits in emails that he's been lying about how well his program was working) doesn't mean that what happened in Indy was an isolated incident. There are numerous school privatization grifters out there trying to grab taxpayer dollars to run their latest scheme under the guise of "school reform," and the same kind of scandal will inevitably happen here in Wisconsin unless we put a stop to it now.

Ironically, I left Indiana in 2005 in no small part because I wanted to get back to Wisconsin, as I saw the Badger state as maintaining a higher value on education and quality of life. And what did I get 5 years later? The Age of Fitzwalkerstan, where our governor has copied the policies of Indiana Governor Mitch Daniels, and has gone out of his way to try to implement the same system that Tony Bennett failed at in Indiana. As someone who's still in contact with people who have had to work under Bennett's pro-privatization policies, I can say "You shouldn't be doing that."
Posted by Jake formerly of the LP at 9:24:00 AM