....some days are better than others. 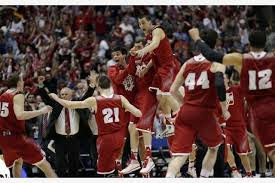 In addition to the awesome fact that THE WISCONSIN BADGERS ARE GOING TO THE FINAL FUCKING FOUR!, it was a great game between two well-coached teams that played about as hard as you could for 45 minutes. Even the horrid officiating couldn't besmirch this classic, and Will Ferrell has now been replaced by Mr. Kaminsky in this town as the best Frank the Tank.

I watched it at a near-east side bar with friends, correctly gambling that we'd be able to get a table if we got there in time for the first game (Florida-Dayton), and beating the crowds that showed up over the next hour to jam the place. Even though it really wasn't a sports-centric place, it still went up for grabs after that final shot (which wouldn't have counted anyway).

About a half-hour later, I made it down to State Street, parking near the Plaza on Gorham near Henry. We were surprised not to see the road blocked, but that's because the real action was going on a couple of blocks west of there. 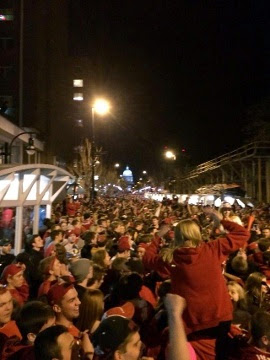 I did get down that direction eventually. Lots of people, but really nothing dangerous. Cops were out, but not overbearing, and things were remarkably non-chaotic (in contrast to the U of Arizona in Tucson, where riot police ended up shooting beanbags and tear gas at the crowd after the game). Having been a student on State Street on Tokyo Night when the Badgers clinched a Rose Bowl berth in 1993, it wasn't nearly as crowded or crazy as that one, somewhat because last night hoops game ended at 10pm instead of 2am, but also possibly because this wasn't as much of a "I never thought this would happen."

And it's that reality which makes this Final Four appearance feel even better than the Cinderella run in 2000. This isn't a fluke, this team is truly that good (especially with Kaminsky taking his game to an entirely new level, Sir Charles can't say enough good things about his game).

As Badger announcer Matt LePay put it in that video "I CAN believe I'm going to say it!" Because they are truly that good, there is no reason they should be merely happy to be in the Final Four, they should believe they can cut down the nets. As Joe Panos said in 1993, "Why not Wisconsin?" They've already beaten 3 of the 5 teams that are remaining in the Tournament, and didn't play the other 2. It is certainly possible that this Wisconsin can do what the guy who crashes into the lockerroom at the end of the video did for another Wisconsin-based team in the same North Texas Stadium 3 years ago- win it all.
Posted by Jake formerly of the LP at 2:23:00 PM