Yesterday featured another monthly state jobs report, this time for February. And as the higher jobless claims portended, Wisconsin lost 9,500 jobs in February. and 1,600 in the private sector. In addition, January also had a downward revision of 200 private sector jobs, meaning that the state is now down 1,800 private sector jobs for the first 2 months of 2014, and 3,100 overall. Now, the 9,500 total job loss has a lot to do with a seasonal snapback in government jobs- a loss of 7,900 after a gain of 6,600 in January- but it doesn't change the fact that it's a huge number, and digs an even larger hole for the state in the Age of Fitzwalkerstan. 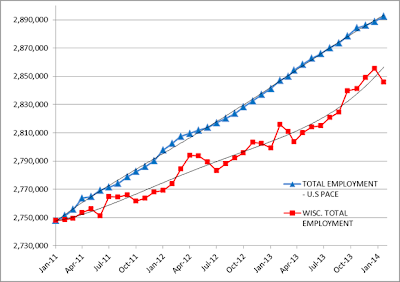 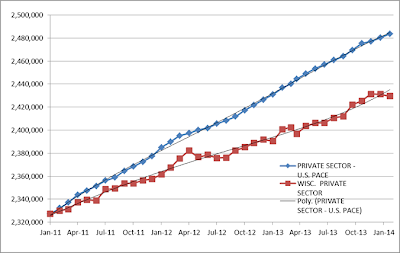 And then today's state-by-state jobs report from the Bureau of Labor Statistics showed just how bad things were in Wisconsin compared to everywhere else. And it's right in the 2nd paragraph.

So with the 2nd-most jobs lost in the country, you'd think that would be a big headline in the local newspapers, especially with job numbers being such a central part of the November governor's race (well, after the headlines about the former Assembly Majority Leader being charged with two felony counts of sexual assault).

OF COURSE THE MEDIA BURIED THE JOB LOSSES. The headlines and focus of the stories in the Milwaukee Journal-Sentinel, the Wisconsin State Journal, and the Green Bay Press Gazette all led with the unemployment rate falling to 6.1% in February (not really significant), over the huge amounts of jobs lost. In fact, the Green Bay and Madison papers DIDN'T MENTION THE JOB LOSSES AT ALL. And by the way, last month the state also reported the unemployment rate was 6.1%, and it is only through an upward revision for January, that the same 6.1% in February can be considered a "drop." The Journal-Sentinel was the only one of the state's 3 largest newspapers to give that reality more than a passing notice.

This type of misreporting of the February jobs numbers goes past simple negligence into pure bias, because both numbers are part of the state report (although the Reggie Newson-led Department of Workforce Development tried to bury the job loss information as best they could), but only the unemployment rate is emphasized, despite the job losses being much more of a standout stat nationwide. And the Democratic Party of Wisconsin and the Mary Burke campaign needs to be bringing this issue to the forefront, through statements and ads, because it's pretty obvious the media in Wisconsin won't report on Scott Walker's failures unless they are forced to.
Posted by Jake formerly of the LP at 9:29:00 PM