The Center for Budget and Policy Priorities released a long rundown of higher education spending across all U.S. states late last week. It gave a couple of stats that seems contradictory on Wisconsin's investment in higher education in the Age of Fitzwalkerstan, but it can be easily explained. In fact, one item that "increased" state support of higher education directly led to the higher ed cuts that we are seeing today.

On one hand, the CBPP report says Wisconsin seems to measure up well compared to the rest of the country.

•In only four states ― Montana, North Dakota, Wisconsin, and Wyoming ― is per-student funding now above its 2008 pre-recession levels.

HUH? All we've heard about is how Wisconsin is slashing spending on higher ed under Walker? What gives?

It's a misleading figure, and it's because of the $406 million giveaway for property tax relief from 2014. This increased the amount of money the state of Wisconsin gave to the state's Technical College System, but it was also not allowed to add to the Tech Colleges' budgets, and instead was a gimmick to lower property taxes ahead of the 2014 election. Even worse is that the giveaway wasn't funded with taxes, but was a way to blow one-time surplus, with the spending continuing in future years without the taxes to back it up.

The CBPP admitted this in a follow-up post which explained the $406 million initiative, and that it didn't translate into further investment in the schools.

Our report focused on state support due to the outsized role it plays in higher education funding. But in Wisconsin, looking only at state support led us to calculate that per-student funding for colleges and universities rose 3.3 percent since 2008. In fact, if you exclude the shifted funding responsibility for the technical college system — which appears as additional state support — state funding for Wisconsin’s public two- and four-year institutions has fallen by roughly 25 percent per student since 2008.

That drop would put Wisconsin as the 12th largest reduction in state support per student in the US over the last 8 years.

The unfunded giveaway and other reckless Walker/WisGOP tax cuts directly led to a $2.2 billion budget deficit for the 2015-17 budget, which Gov Walker and the WisGOP Legislature decided to "solve" through measures that included a $250 million cut to the UW System. As a result, Wisconsin "stands out" in the following chart from the CBPP report in higher education funding for this current fiscal year. 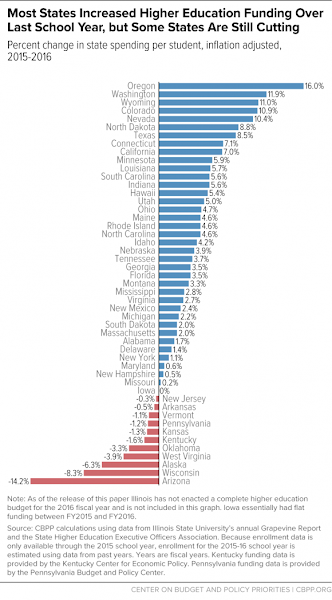 Over the past year, most states increased per-student funding for their public higher education systems. (See Figures 3 and 4.) Thirty-eight states are investing more per student in the 2015-16 school year than they did in 2014-15.

•But this trend is far from universal. In 11 states, per-student funding fell over the last year — declining, on average, 3.6 percent or by more than $220 per student....

•Five states — Alaska, Arizona, Oklahoma, West Virginia, and Wisconsin — cut funding by more than $250 per student over the past year.

Arizona, Oklahoma, and West Virginia. Not states I really care to be associated with when it comes to eju-kay-shun. And not really the way for our state to prosper for the future.
Posted by Jake formerly of the LP at 10:33:00 AM