QCEW shows Walker job record as bad as ever


Was busy watching hoops and drinking with friends yesterday (like all good Americans should on the first weekend of March Madness), so I couldn't chime in with the release of the Quarterly Census on Employment and Wages- the report Scott Walker claimed was the "gold standard" of job numbers because of its more complete sample. Well, this is problem with being as serially deceptive and spinning as Walker, because inevitably your spin comes back to bite you in the ass.

Here's the quick and dirty from yesterday's release.

And DEAD LAST IN THE MIDWEST for all three categories for that time period. And yes, I know the Walker DWD "coincidentally" released numbers yesterday morning that showed huge job growth in February and positive revisions for January, but forgive if I'm skeptical, because let me remind you of what Walker's DWD was releasing about the September 2014 jobs figures, which was the last release before the November 2014 elections.

Highlights of today's BLS report of state-by-state employment and unemployment estimates (seasonally adjusted), which are each based on monthly surveys, include:

And now we know THOSE LAST TWO CLAIMS WERE PROVEN NOT TO BE TRUE, as the QCEW shows that we were behind every Midwestern state for job growth. I'm not saying Walker's DWD was lying before the election, I'm just saying that the information wasn't yet known. ANd I'm saying, we deserve the right to be skeptical of the alleged runup in jobs reported in Wisconsin over the last 5 months, as Walker tries to take credit for a "Wisconsin turnaround" on the campaign trail, because the last 4 years of Walker's record shows that Wisconsin is still brutally lagging.

I'll have more detail on this report later on, maybe when the hoops dies down a bit. But let's see if a few people start asking real questions about our Governor and his "40th place in the US" job ranking.

EDIT: Here are two updated charts showing the rate of private sector job growth over the last 4 years measured. You can see that Wisconsin's private sector job growth peaked around March 2011- the month that Act 10 was passed. And the trend noticeably started declining around September 2011, as Scott Walker's and WisGOP's first budget took effect. 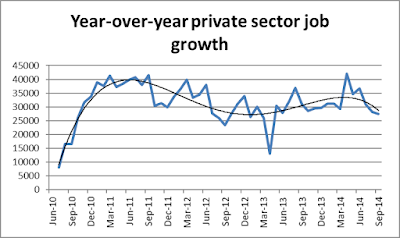 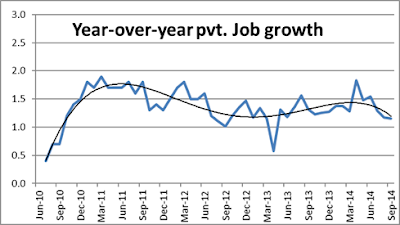