More on how Ron Johnson's horrid week, ties back to NRA/Russia getting him elected (pt. 2)

Let's go back to a story I have hammered on for two years, which came from Bruce Murphy at Urban Milwaukee in January 2017, and asked "Ron Johnson Asleep On Russian Hacking?" 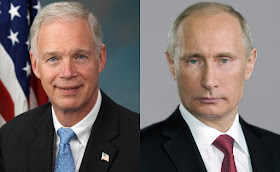 3 years ago, Johnson knew about what Vladimir Putin and company were doing to deceive Americans and slant the 2016 elections, as he was informed by President Obama and Homeland Security Secretary Jeh Johnson about the efforts back in September of that year. But he went along with Senate Majority Leader "Moscow Mitch" McConnell, and was a part of the pre-election cover-up.

“In a secure room in the Capitol used for briefings involving classified information, administration officials broadly laid out the evidence U.S. spy agencies had collected, showing Russia’s role in cyber-intrusions in at least two states and in hacking the emails of the Democratic organizations and individuals,” the Post reported....

But Republican leaders declined to join a bipartisan response to the information. Senate Majority Leader Mitch McConnell “raised doubts about the underlying intelligence and made clear to the administration that he would consider any effort by the White House to challenge the Russians publicly an act of partisan politics,” the Post reports....

[Johnson] has engaged in his own pattern of misinformation on the subject. After the CIA publicly released a report in January concluding that Russia meddled in the presidential election to help Republican presidential candidate Donald Trump win the election, Johnson issued a statement to the Wisconsin State Journal saying he would “would need more definitive information before drawing further conclusions.” Johnson did not reveal that he had been informed back in September this was happening.

Johnson went on to complain to CNBC that the CIA refused to brief him on Russian hacking, saying “I have not seen the evidence that it actually was Russia,” while failing to note the CIA report’s echoed the briefing he’d received from other intelligence leaders in September.

Johnson also complained that Obama had failed to confront the Russia government with strength, even though the Obama administration had proposed a strong stand on cyber hacking which Johnson declined to join.

And why would Johnson keep Wisconsin voters in the dark about this? Because the Russians were helping him and Trump win in Wisconsin through their online messaging and release of hacked information.

But it gets worse than that for Russian Ronnie, as his 2016 campaign was also tied up in a scheme where the NRA and the GOP illegally worked together to get Johnson and other GOP Senators elected. The Campaign Legal Center said the scheme involved the NRA setting up a fake consulting group named Starboard that did what GOP consulting firm OnMessage told them to do.

The NRA’s lobbying arm and PAC contracted with Starboard to create ads supporting Johnson in 2016, as well as U.S. Senate candidates Tom Cotton, Cory Gardner and Thom Tillis in 2014. Johnson has an “A” ranking with the gun rights group.

The Senate candidates, meanwhile, hired OnMessage, according to the CLC.

The NRA essentially is Starboard’s only client, with the exception of a small job for the Republican National Committee. OnMessage repeatedly has taken credit for advertisements the NRA paid Starboard to produce.

And guess who the NRA was getting money and assistance from?

Red Square near the Kremlin with a Russian officer. Met earlier with Russian Foreign Minister who spoke on Mid East. pic.twitter.com/ZcDdQB65lb

BREAKING: A new Senate report reveals that the @NRA was a 'foreign asset' to Russia ahead of 2016, promising access to U.S. officials in exchange for Russian business. https://t.co/hOai6sBXzB

Now do you see why Russian Ronnie Johnson might want to deflect and lie about what Donald Trump might have done with foreign countries to get himself elected, and how he has abused his power once he took office? Johnson is neck-deep in these scandals, and likely owes his seat and the GOP's Senate majority to that foreign interference. The last thing he wants to do is to have people think about these things, so he misdirects and (ab)uses his position as Homeland Security Committee Chair to avoid hearings and action that might raise awareness of the hacking and propagandizing that has been done to voters in the past...and will be done on voters in 2020, if GOPs are allowed to look the other way.

But because Ron Johnson couldn't help but make an ass of himself his weak lies and spin jobs, it's finally turning some of the spotlight in these impeachable scandals to the senior Senator from Wisconsin.

A U.S. Senator had evidence of a criminal quid pro quo by the President of the United States and failed to report it.

The Senate Ethics Committee should investigate what Sen. Johnson knew, when he knew it, and why he didn’t take appropriate action. https://t.co/cJfniBWd1m


And that investigation is long overdue, because Russian Ronnie has played a significant role in allowing the chicanery and coverups that have been rampant in GOP politics over the last 4 years. DRAG HIM.
Jake formerly of the LP at 9:15:00 AM
Share