Trade deficit keeps blowing up. Not how Trump Tariffs were supposed to go

Lower exports for December but higher imports? An increase of nearly $69 billion in the 2018 trade deficit?

Also, the damage from the rising trade deficit isn't just that we're spending more than we're sending out, to levels that we last saw right before the Great Recession. It's also that we havent seen that much of an increase in wages in the US from that protection, particularly in manufacturing and agriculture.

Agriculture in particular got shelled. Real exports in "foods, feeds and beverages" are down year-over-year in each of the last 4 months, and soybean exports were down more than $4 billion in 2018 vs 2017.

It also has caused problems domestically, as illustrated by this recent Cap Times headline 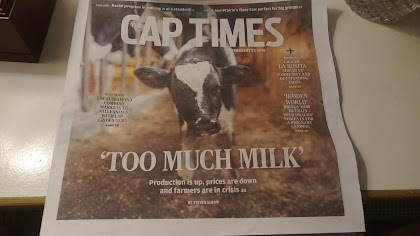 The domestic surplus has dropped prices further, which has driven even more Wisconsin dairy farms out of business.

Huh, no wonder why the Trump Admin is trying to imply they're closer to a trade deal with China (don't believe anything till th ere's a signature, by the way). They know the haphazard way they threw up these trade barriers is not working.
Posted by Jake formerly of the LP at 7:46:00 AM