All of these 3 minutes of Trevor Noah are perfect. Dems should stop listening to what pundits claim is more "electable," and VOTE FOR THE BEST CANDIDATE.

This goes along with a quick column that Esquire's Charlie Pierce put up earlier this week regarding how too many Dem voters are making their primary calculations.


Jonathan Martin's taking some heat online about this piece in which a bunch of people talk about how much they'd like to vote for Senator Professor Warren If Only...(Fill in pundit-driven banality here.) The criticism is a little off-target; these pieces get done during every campaign and, if there's one thing we've learned about SPW's campaign so far, it handles bumps in the road as smoothly as a turbo Porsche. But I would like to point out one amazing quote that does not fill me with confidence in my fellow citizens. It is the kind of quote you'd die for, and I am very jealous of Martin for having landed it.

“If it were completely up to me, I’d vote for her."

My fellow citizen, not to be too strident, but, it is fcking well completely up to you.


"I like this candidate, but he/she won't be able to win." I remember hearing similar words about a US Senator from Illinois around this time of 2007. Not saying Liz is Barack, but that sentiment is/was similar. Stop overthinking this.

I understand that there is a lot of PTSD out there from 2016, and the stakes of losing in 2020 are awful. But put the trauma away and look at things with clear eyes. Candidates are electable because more voters choose to vote for them. And voters don't respond to defensive postures and calculated centrism, especially when a corporate-friendly agenda isn't working for the vast majority of the country.

After all, it was a major drop-off of voters in Milwaukee that was a main factor behind Hillary Clinton losing Wisconsin in 2016. If you're voting on "electability", having an agenda of change based in core values that inspires non-voters into becoming voters needs to be a central part of your thinking.

On a related note, has anyone given a reason to vote for Joe Biden in the Dem primary that doesn't include the words "polls" (which are irrelevant 15 months before an election), or "Obama" (who isn't coming back, no matter who is on the ballot)? Because I'm not sure one exists. Any Dem candidate is better than Donald Trump, and if the economy falls as I think it will, any Dem will be heavily favored by November 2020. So vote for the one that resonates with you.

So why not say so, and stick it in people's faces. And if it hurts people's fee-fees that they might be seen as racist for supporting such a racist... 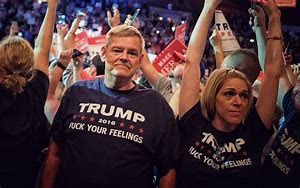 They can OWN IT, or look in the mirror and change. Those people need to put on the big boy and big girl pants, and deal with the orange ogre in the White House.

For the 2020s, you can come along with us on the path of decency, or you can go away. But you should not be pandered to. And we don't need to compromise what we believe in to win big next year, and start to reverse this country's moral, political, and economic decline.
Posted by Jake formerly of the LP at 9:49:00 AM