Deficit keeps jumping in FY 2020, and Trump/GOP won't slow it down before November

With the release of today’s US Treasury Statement, we saw that the US budget deficit continues to grow above last year’s large levels. What’s worse is that the US ran a deficit in a year where a lot of quarterly tax payments come in, which usually doesn’t result in a deficit.

The numbers: The federal government ran a budget deficit of $32.6 billion in January, compared with a surplus of $9 billion in the same month one year earlier, the Treasury Department said Wednesday. This is in-line with the $32 billion deficit estimated by the Congressional Budget Office last week.

What happened: Spending for January was $404.9 billion while the government brought in $372.3 billion.

That’s not a good sign for the deficit to be up more than 25% for the first 4 months of the fiscal year. The Congressional Budget Office said last month that the deficit is only supposed to rise by 3% for FY 2020. Even if the deficit rises at the same amount from February to September as it did last year, the deficit would still end up $40 billion above those estimates. 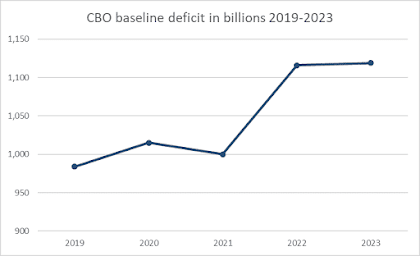 EDIT- But then I looked at the CBO's monthly budget report, which notes the following.

However, outlays during the first four months of this year were boosted by shifts in the timing of certain payments that otherwise would have been due at the beginning of February, which fell on a weekend. Those shifts increased outlays through January by $55 billion; without them, the outlay increase would have been 6 percent and the deficit for the first four months of 2020 would have been $333 billion, roughly $23 billion larger, rather than $78 billion larger, than the amount for the same period last year.

Ok, so basically in line. But still on pace for a $1.015 trillion deficit for this year.

We’ll see what happens with tax season, to see if people are still writing more checks to the IRS due to the GOP Tax Scam, or if there’s an effect from the Bubbly stock market with increased capital gains payments. Both of those factors would reduce the deficit through higher revenues. Or, if refunds bounce back after people have adjusted to the new tax rates, then the deficit will grow farther.

If you dig further into the new Treasury statement, you’ll see that both FY 2020 has increases in both revenue and spending, which would be expected in a time when the economy continues to grow and there are no new tax cuts put in place over the last year.

Seems like minor spending reductions would get things in line, but the Trump Administration doesn't want to stop the spending, at least ahead of the election. After all, increased government spending added more than 0.3% to GDP in 2018 and another 0.4% in 2019. If it wasn't for Uncle Sam's help US GDP would have fallen below 2% last year, and would likely fall further this year. So instead we get the sugar highs of high fiscal deficits and lower interest rates

That easy money may result in DOW 30,000 in the coming days, but it sure isn't doing anything for the typical American worker. And these higher deficits are likely going to tie our hands once the Bubbles pop and the next recession comes in, much like they did in 2009 when President Obama took office.

But the Trump/GOP crowd doesn't care about that future reality, because all they care about is in keeping things pumped up for the next 9 months.
Posted by Jake formerly of the LP at 5:35:00 PM