For weekend reading, check out this profile in Politico Magazine of political scientist Rachel Bitecofer. Dr. Bitecofer has developed a theory that takes down many "electability" arguments that Beltway media have, and correctly predicted the scale of 2018's Blue Wave as a result. 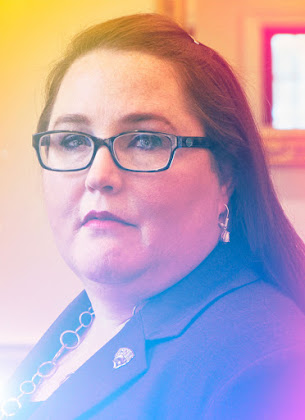 Basically, Bitecofer says elections aren't decided on ideology, but on who decides to show up to vote.

Bitecofer’s theory, when you boil it down, is that modern American elections are rarely shaped by voters changing their minds, but rather by shifts in who decides to vote in the first place. To her critics, she’s an extreme apostle of the old saw that “turnout explains everything,” taking a long victory lap after getting lucky one time. She sees things slightly differently: That the last few elections show that American politics really has changed, and other experts have been slow to process what it means.

If she’s right, it wouldn’t just blow up the conventional wisdom; it would mean that much of the lucrative cottage industry of political experts—the consultants and pollsters and (ahem) the reporters—is superfluous, an army of bit players with little influence over the outcome. Actually, worse than superfluous: That whole industry of experts is generally wrong.

So what does influence the outcomes of elections at the state and federal levels? Basically which demographics of voters decide to show up, and what motivates them to show up. That's because we live in a time of extreme polarization where we often concentrate more on making sure certain people lose and/or get the system changed than we do in analyzing ideology.


In a piece explaining his work in POLITICO Magazine, Abramowitz wrote: “Over the past few decades, American politics has become like a bitter sports rivalry, in which the parties hang together mainly out of sheer hatred of the other team, rather than a shared sense of purpose. Republicans might not love the president, but they absolutely loathe his Democratic adversaries. And it’s also true of Democrats, who might be consumed by their internal feuds over foreign policy and the proper role of government were it not for Trump.”

Bitecofer took this insight and mapped it across the country. As she sees it, it isn’t quite right to refer to a Democratic or Republican “base.” Rather, there are Democratic and Republican coalitions, the first made of people of color, college-educated whites and people in metropolitan areas; the second, mostly noncollege whites, with a smattering of religious-minded voters, financiers and people in business, largely in rural and exurban counties.

Accordingly, she believed that whom the Democrats nominated didn’t matter much, and while the rest of the country focused on the districts where Hillary Clinton defeated Trump, she thought those were already mostly in the bag, and so focused instead on the 20 or so districts where Trump performed worse than Mitt Romney had in 2012. Those were places with latent Democratic possibility, and had the national party recognized it earlier, they could have flipped even more seats.

Sure enough, those were the areas that Dems gained in at the state level in many places, particularly Virginia (where Bitecofer is based out of). Places that have higher levels of education but previously voted Republican have slanted hard toward Democrats, including in Wisconsin, where the better-educated counties and Milwaukee County suburbs gave a decisive turn towards Tony Evers that resulted in Scott Walker being kicked out of the Governor's Office. 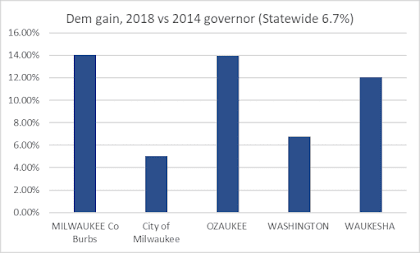 You'll also notice that the City of Milwaukee didn't turn as heavily toward Dems, mostly because Dems already had 76% of the City's vote in 2014. But what they and Dane County did to get Evers elected goes along with another Bitecofer theory - "turnout surges". 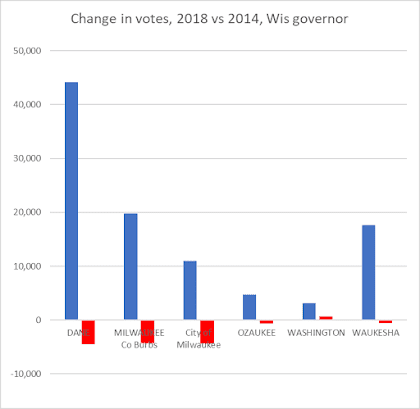 And the flip side of Bitecofer's theory mentions that areas that have a large number of lower-educated white voters have also had their own turnout surges toward Republicans. Walker actually got more votes than he did in 2014, when he won by 5.7%, but was swamped by much larger turnout for Evers. 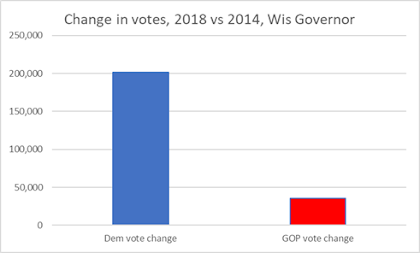 Looking ahead to 2020, Bitecofer explained back in July why she thinks Dems are strong favorites to beat Trump (assuming the election is legitimate), and why Wisconsin and other Rust Belt states are likely to go back to being blue.

Why is Trump in so much trouble in the Midwest? First, and probably most important, is the profound misunderstanding by, well, almost everyone, as to how he won Michigan, Wisconsin, and Pennsylvania in the first place. Ask anyone, and they will describe Trump’s 2016 Midwestern triumph as a product of white, working class voters swinging away from the Democrats based on the appeal of Trump’s economic populist messaging. Some will point to survey data of disaffected Obama-to-Trump voters and even Sanders-to-Trump voters as evidence that this populist appeal was the decisive factor. And this is sort of true. In Ohio, Trump managed the rare feat of cracking 50%. Elsewhere, that explanation runs into empirical problems when one digs into the data. Start with the numerical fact that Trump “won” Pennsylvania, Wisconsin, and Michigan with 47.22%, 48.18%, and 47.5% of the vote, respectively, after five times the normal number in those states cast their ballots for an option other than Trump or Clinton. This, combined with the depressed turnout of African Americans (targeted with suppression materials by the Russians) and left-leaning Independents turned off by Clinton (targeted with defection materials by the Russians) allowed Trump to pull off an improbable victory, one that will be hard to replicate in today’s less nitpicky atmosphere. Yet, the media (and the voting public) has turned Trump’s 2016 win into a mythic legend of invincibility. The complacent electorate of 2016, who were convinced Trump would never be president, has been replaced with the terrified electorate of 2020, who are convinced he’s the Terminator and can’t be stopped. Under my model, that distinction is not only important, it is everything.

In fact, Trump got the 3rd fewest votes of any GOP presidential candidate out of the last 5 elections, and fell more than 70,000 votes short of what George W. Bush got while losing in 2004. 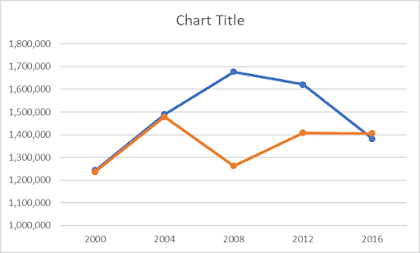 That chart also shows that Trump got fewer votes in Wisconsin than Mitt Romney did in 2012. But because more people voted overall in Wisconsin in 2012, and fewer of them voted for 3rd Party candidates, Barack Obama won by nearly 7%. As Bitecofer notes, the 188,330 people that voted for a candidate not named Trump or Clinton made a big difference here, and it was much larger than we had seen in the last 3 elections. But it wasn't unlike 2000, where a lot of people said "What's the difference between Gore and Bush?", and it showed up in both lower turnout and higher 3rd Party votes. 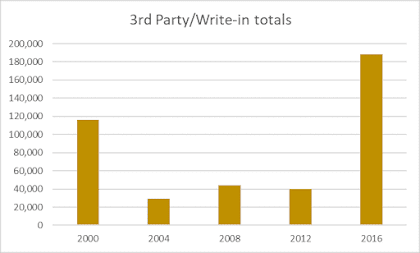 Now maybe some Republicans returned to the fold for 2020, because RW talk radio is all in for Trump, and the Charlie Sykes types have no air time these days, so those sheep will now vote Trump. but I bet just as many people that thought "how bad could Trump be as president?" are now saying "Worse than I imagined."

As a result, there aren't 1.6 million Wisconsinites that will vote for Trump or any other Republican this November, no matter what the circumstance is. So if Dems can get 1.6 million votes, they will win this state. And this also explains why Republicans constantly are trying to install voter suppression measures - they can't win unless fewer people vote.

Now Dems need to pick a candidate that'll encourage 1.6 million people to want to vote for that person. The way they get to that number is secondary- they can vote Dem because they want that candidate to lead the country, or because they simply want Trump gone. Which is why Bitecofer thinks many of the ideological arguments in the Democratic primary aren't that big of a deal.

Unlike forecasters like FiveThirtyEight’s Nate Silver, who believe that candidates seen as too ideologically extreme pay a political cost, Bitecofer doesn’t see much of a downside to a candidate like Bernie Sanders. But she doesn’t see much of an upside either, since ideology isn’t as big a motivator as identity, and since Sanders did not in fact bring hordes of new voters to the polls in 2016. (Overall turnout in the 2016 primaries was down compared with 2008, when Barack Obama led a surge in the youth vote. In 2016, Sanders just did remarkably well among the young as Clinton tanked.) There is some risk to nominating Joe Biden, who could be seen as a candidate of the status quo against a disrupter like Trump, but either way, the key will be to do their version of what Trump does to them every day: make the prospect of four more years of Republican rule seem like a threat to the Republic, one that could risk everything Democratic-leaning voters hold dear.

But that "disrupter" note is a key corollary to Bitecofer's theory that needs to be followed by Dems if they do win 2020. If they fail to deliver change to voters who wanted things to get better from what we have today, and don't adequately blame Republicans for obstructing progress, many potential Dem voters won't turn out. Likewise, GOPs who are angry from Trump losing (and/or Dems winning) will be ready to vote in 2022, and that's how they can take back Congressional seats and governorships that they will have lost in 2018 and 2020.

So if you want Dems to win beyond 2020, you might want to pick the candidate that will not only drive Dem turnout this November, but also be someone who will change our politics and policies in 2021 to a l;evel beyond merely being a different person occupying the White House (cough- WARREN - cough).