The revelations by One Wisconsin Now of Rebecca Bradley’s vile printed opinions against gay people and those afflicted with HIV/AIDS are bad enough, even if she wrote it while she was in college in 1992. First off, I graduated high school in 1992, the summer after Magic Johnson revealed he had caught HIV through unprotected heterosexual sex, and to say something like this about people with HIV/AIDS was way out of bounds back then. 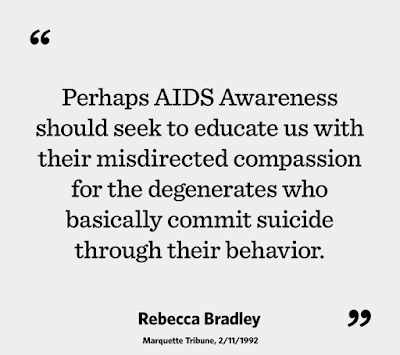 As Molly Beck of the State Journal tweeted today, the uproar from Bradley’s absurd rantings was so much that the Marquette Tribune ran out of space to run the letters that ripped Bradley's column. And Bradley's Reagan-era fundie thinking of “AIDS is God’s punishment” was already well out of step with much of America in 1992, when red ribbons for AIDS awareness and support for those afflicted was a common accessory at major public events that year.

But it’s not like these grunge-era writings from Rebecca Bradley are in isolation. Here’s the Capital Times today following up on more social-issue takes from “Justice” Bradley, this time on abortion and contraception. Not only did she use brutal language in the material she published in college (comparing abortion to the Holocaust and slavery), she hadn’t changed her views 15 years later, when she was an established lawyer in her mid-30s.

More recently, Bradley in 2006 penned a column for the now-defunct publication "MKE" in support of a proposal that would have allowed pharmacists to refuse to fill certain prescriptions, including contraceptives, based on their religious beliefs. (in fact, Bradley called physicians who fill such prescriptions “party to murder” and that such contraception was “a morally abhorrent termination of life.” )

Asked then whether she would still support such a law, through a spokeswoman, Bradley declined to weigh in, citing the potential for the issue to come before the high court.

"Justice Bradley believes it is the role of the Legislature to make the law and the role of a justice to apply it," Bradley spokeswoman Madison Wiberg said at the time. "Due to the potential for this issue to come in front of the state Supreme Court, it would be improper for Justice Bradley to give an opinion at this time."

Yes, why would prospective employers (aka “voters”) want to know what someone might do on the job before they choose to hire them? #headdesk

But let me translate that cowardly bit of politi-spin from Bradley’s campaign for you. “Yes, Becky Bradley still thinks contraception should be illegal, and would let right-wing legislators impose any abortion or contraception restriction they want.”

This is the real story with Ms. Bradley Foundation’s hateful fundamentalist writings- there’s no reason to think she doesn’t have the same beliefs today. If she didn’t follow those writings today, she would have said so immediately, and wouldn’t be ducking real media when they give her a chance to explain herself (no Becky, a scripted interview with Charlie Sykes does not count).

.@JudgeBradleyWI used side door to enter fundraiser at the Milwaukee Club. Campaign won't make her available for Qs. pic.twitter.com/TNw2gYSizT

But let’s face it, Republican lawyers don’t rise in the right-wing legal world if they follow doctrines of fairness under the law or public honesty or anything that might take into account a connection to the reality of the world in the 21st Century. And Marquette graduate Charlie Pierce points out the influence of this insulated-from-the-outside-world circuit in an excellent skewering of (appointed) Justice Bradley.

OK, it was almost 25 years ago. We all do, say, and think silly things in college. But, here's the thing. It's a little personal. Bradley wrote this noxious swill for the opinion section of The Marquette Tribune. A little more than 40 years ago, I was the editor of that very section of that very newspaper. I don't recall publishing anything that called people "queers," and that was back in the Stone Age. Editorial policy seems to have changed through the years. I mean, wow.

One will be better off contracting AIDS than developing cancer, because those afflicted with the politically correct disease will be getting all the funding. How sad that the lives of degenerate drug addicts and queers are valued more than the innocent victims of more prevalent ailments.

This was fairly common talk back in the early 1990s in those fertile fields of conservative thought from which Trumpism has finally emerged in full bloom this year. Her career has been carefully nurtured within the other flora from those same fields—Heritage, the Club For Growth, the Federalist Society, and something called the Wisconsin Institute For Law And Liberty, which is run by a litigious law professor at our common alma mater named Rick Esenberg. (Professor Esenberg, unsurprisingly, was rather bothered by the Obergefell decision.) And, no, I certainly wouldn't want to be judged today by something I'd written in college, but as someone with a vested interest in the university and its journalism program and its newspaper, I'd like to say for the record that I hope Rebecca Bradley loses by ten million votes.

What Charlie’s saying can’t be repeated enough, and not just the part about how Rebecca Bradley being an alum should be an embarrassment to Marquette University. “Justice” Bradley got her name out there in the Charlie Sykes/Bradley Foundation circuit and was selected by Gov Walker three times BECAUSE she’s a unthinking, Scalia-like bigot who will allow the law to be bent to the favor of certain right-wing groups. She was chosen by Walker to side with right-wing interests regardless of what the effects of such a decision would be, or whether the decision has any connection to current criminal law, the writings of the U.S. Constitution, or the writings of the U.S. Supreme Court.

This is how they roll, this is why Bradley left the bench to tell WMC she was “your public servant”, and this is why she should be disqualified from serving on that bench one day longer than she has to. If you have a Wisconsinite with an ounce of pride and any semblance of a belief of fairness and decency, you must vote to fire this ideological puppet on April 5 and replace her with JoAnne Kloppenburg.

I'll end on a fitting note, with production from a great Wisconsinite, Butch Vig