February jobs bounce back in Wisconsin, except for manufacturing

Now that the benchmarking process is over, the state of Wisconsin is catching up on its jobs figures, releasing a very strong February report.

Other statistically significant changes include a month-over-month job gain of 4,100 jobs in Education and Health Services, and year-over-year additions of 7,600 jobs in Transportation, Warehousing and Utilities and 11,100 jobs in Education and Health Services. Additionally, revised January private-sector job counts swung from a decline of 1,400 to a gain of 5,800 private sector jobs, a difference of 7,200.

The most interesting part to me is not the 8,000 jobs gained in February (while nice, it’s not an unusual one-month bump), but the upward revision of 7,200 jobs in January, pushing our current figure 15,200 above what we had last month. This allows for a gain on the national rate compared to where we were last month, reducing the Walker jobs gap by over 10,000. It’s still a huge gap (94,400), but that’s better than the 104,700 we were at two weeks ago. 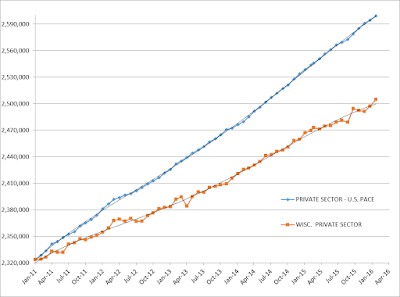 The positive Wisconsin numbers reflect a national jobs situation that is in very good shape, where nearly a quarter-million private-sector jobs were added in February, and layoff notices are at some of the lowest levels in more than 40 years.

In a separate report, the Labor Department said initial claims for state unemployment benefits rose 6,000 to a seasonally adjusted 265,000 for the week ended March 19.

The government also revised data going back to 2011, which showed claims generally trending lower than previously reported. Claims for the week ended March 5 were the lowest since November 1973. The low level of claims has economists anticipating another month of strong job gains in March after nonfarm payrolls increased by 242,000 in February.

However, there is one black mark on the nation’s economy, and it exists in Wisconsin as well as nationwide. The state lost another 1,700 manufacturing jobs in February (2,200 on a non-seasonally adjusted basis), and January’s total was revised down by 300. This means Wisconsin now has 100 fewer manufacturing jobs than it did a year ago- when the WisGOPs in the Legislature passed (right-to) work-for-less legislation, and Gov Walker signed it, claiming it would “[give] employers another compelling reason to consider expanding or moving their business to Wisconsin.” Yeah, that theory hasn’t worked out, has it Scotty?

But we’re not alone in having manufacturing suffer recently. From the same Yahoo!Finance article that talks up the lower unemployment claims came this other bit of economic data today.

Some of this is related to the collapse in oil prices and the stronger U.S. dollar over the last year, but it also shows that our economic recovery still isn’t firing on all cylinders. It leaves a legitimate question lingering to find out if the struggles in manufacturing drags down the rest of the economy in 2016, or if we fight through it, and our factories start hiring again.

For now, it appears that the rest of Wisconsin’s and the U.S’s job picture now looks like it got off to a decent start this year. And I suppose that’s something worth being happy about, if not entirely satisfied with.
Posted by Jake formerly of the LP at 6:12:00 PM