SURPLUS? In GOP's Bubble, sure. In real Wisconsin? Don't bet on it

You start to head home from work, flip open the Twitter feed, and sometimes the topic is chosen for you.

WHAT? I'd been expecting revenues to go down, based on the disappointing figures to date in Fiscal Year 2017, and even Governor Walker's own Department of Administration reduced their revenue estimates two months ago vs what LFB predicted in 2016.

So what's going on here? Well, let's click on the actual LFB document and take a gander.

Table 3 shows general fund tax revenue estimates for 2016-17 and each year of the 2017-19 biennium. Over the three-year period, these estimates are $454.6 million (0.95%) higher than the projections released by the Department of Revenue (DOR) last November. By year, the new estimates are higher than DOR's projections by $63.4 million in 2016-17, $145.3 million in 2017-18, and $245.9 million in 2018-19. The estimates for all three of the state's major tax sources (the individual income tax, general sales and use tax, and corporate income and franchise tax) are greater than DOR's estimates in each year. The new estimates are based on the most recent national economic forecast and tax collections data, both of which are generally stronger than in November. The estimates also incorporate all law changes enacted to date.

I will agree that the revenue picture brightened earlier today when the Walker Administration released a nice bounce-back in December's numbers, bumping year-over-year revenue growth for Fiscal Year 2017 from 1.2% to 2.6% (and they released those numbers ahead of schedule, what a concidence!).

Of course, even with that improved picture, the LFB says the state will still come in more than $150 million BELOW what we needed to raise to match the LFB's own projections from last year. So how are we not in need of a budget repair bill? Lower spending in Medicaid, due to lower enrollments and different types of usage (I'll leave it up to you as to why that might be). The LFB says that Medicaid spending will come in $312.5 million below what was budgeted 2 years ago, and that lapse in spending along with others will allow for the state to carry over $427 million into the next budget (but, you know, Obamacare is in a "death spiral" and destroying the country fiscally).

But what about the future years in the 2017-19 budget? The LFB says that's because the economic analysts they follow are indicating that Donald Trump truly will make America Great Again!

Under the January, 2017, forecast, IHS Marki! predicts real GDP growth of 2.3% in 2017, 2.6% in 2018, and 2.3% in 2019. The main drivers of growth are expected to be consumer spending, business fixed investment, and residential investment. However, the trade deficit is forecast to increase due to an appreciating U.S. dollar and growing domestic demand for imports, thereby dampening real GDP growth.

The 2017 forecast is based on the following key assumptions. First, the forecast assumes that the new Trump administration and Congress will lower the average effective personal income tax rate from 21.0% to 19.5% and lower the statutory corporate tax rate from 35% to 20% (partially offset by reducing tax deductions and credits). Second, the forecast also assumes a $250 billion increase in federal infrastructure spending over the next ten years. Third, the 2017 forecast assumes that the Federal Reserve will increase the federal funds rate by 75 basis points in each of the next three years to 1.50% by the end of 2017, 2.25% by the end of 2018, and 3.00% by the end of 2019. Fourth, the Brent spot crude oil price is projected to average $54 per barrel in 2017 and $57 per barrel in 2018. Fifth, the inflation-adjusted, trade-weighted value of the dollar for the broad index of U.S. trading partners is expected to increase 3.3% between fourth-quarter 2016 and fourth-quarter 2017, where it will reach its peak value at 5.5% above the 2016 average, followed by a steady decline. Finally, real GDP growth of major and other important U.S. trading partners is assumed to average 1.7% annually and 3.5% annually, respectively.

Yeah, surrrrre!!!!! We'll have growth jump from the 1.6% rate we're at today to the fastest 3 years of sustained growth in over a decade, now that Trump and the Republicans are in charge! And I might be elected governor of Wisconsin in 22 months! (what? It could happen)

And in an analysis filled with rosy scenarios, this part may be my favorite.

5.4 million more jobs? 4.1% unemployment? And manufacturing growing in a time when the dollar gets even stronger than it is now? Is that an analysis, or Donald Trump throwing shit against the wall in one of his speeches?

Oh, and by the way - the US labor force participation rate is currently at 62.7%, so how would it go "up" to 61.7%? Do these IHS Marki! folks (whoever they are) mean the Employment-Population Ratio instead? And if so, do they really believe it would magically rise by 2% in a time when Boomers are retiring by the day and we are already near full employment?

Equally amazing is that this same analysis assumes rising inflation, with prices going up between 2.1% and 2.5% over each of the next 3 years. But somehow their analysis says that consumer spending, personal incomes and nominal GDP will rise even faster, with each figure rising between 4.4% and 5.3% each year!

Look, if somehow all that happens, then yes, we will likely have a nice revenue bump that could cover the requests in Wisconsin's 2017-19 budget. A quick check indicates that the state would still be spending slightly more than it takes in under that scenario, but the projected carryover would let them squeak by (this does not take into account the $880 million deficit in the Transportation Fund, which is a whole 'nother can of worms to deal with).

That reality is why I wouldn't recommend blowing any of these projected extra funds on tax cuts - it's not likely that the cushion will ever materialize, and a far wiser move (if one is to be made) would be to fill in prior holes made due to cuts in education and state shared revenues. This is not only a worthwhile investment to make, it's also one that can shield Wisconsinites from sizable property tax hikes and/or severe service cuts in 2018 and 2019 if these rosy scenarios fail to pan out.

But watch for the GOPs to try to claim there's a "surplus" and that things are somehow booming in Wisconsin because of Scott Walker and Wisconsin GOP policies along with the prospect of Republicans running everything in DC. And watch for too many media members to be suckered in by those words, and parrot them without explanation, making them seem as foolish as the average shriveldicked white guy who fell for this. 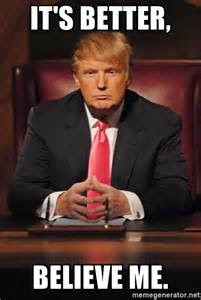