Happy 2017 all. This is a great list from Think Progress on 4 things that were supposed to happen by 2017 because Obama was reelected, and didn't. I feel comfortable violating fair use by giving more detail with these 4.

[1.]
In March 2012, on the floor of the United States Senate, Mike Lee (R-UT) predicted that if Obama was reelected gas would cost $6.60 per by the end of Obama’s second term. Lee said that gas prices would rise 5 cents for every month Obama was in office.

Lee was not alone. Newt Gingrich, running for the GOP nomination, predicted that if Obama was reelected he would push gas to “$10 a gallon.” Gingrich said he would reduce gas prices dramatically by reversing Obama’s energy policies. Gingrich flanked himself with campaign signs promising $2.50 gas if he was elected.

[2.] In September 2012, Mitt Romney predicted that if Obama is reelected “you’re going to see chronic high unemployment continue four years or longer.” At the time, the unemployment rate was 8.1% and had been between 8.1% and 8.3% for the entire year.

What would breaking out of “chronic high unemployment” look like in a Romney presidency? Romney pledged that, if elected, he could bring the unemployment rate down to 6% by January 2017.

The unemployment rate today? 4.6%, lowest it's been in over 9 years.

Number 3 can be summed up with a Tweet from someone who deserves a bit of accountability for past, current and future statements.

The stock market and US dollar are both plunging today. Welcome to @BarackObama’s second term.

The article also notes that "investing expert" Marc Faber predicted on Bloomberg TV at the time that there would be at least a 20% drop in the stock market, because excessive debt by the Obama Administration would drive people out of the market. Uhhh, not so much.

And now the 4th absurd prediction by righties about the last 4 years, with the perp never being taken off the air or apologizing for being so completely wrong.

[4.]
Rush Limbaugh predicted that “the country’s economy is going to collapse if Obama is re-elected.” Limbaugh was confident in his prediction: “There’s no if about this. And it’s gonna be ugly. It’s gonna be gut wrenching, but it will happen.”

The economic free-fall would begin, according to Limbaugh, because “California is going to declare bankruptcy” and Obama would force states like Texas to “bail them out.” California currently has a $2.8 billion budget surplus.

And I'll add that Tex-ass is now in the bottom third of states for job growth due to the oil bust.

And let's move those predictions over into Wisconsin, where Scott Walker, WisGOP legislators and GOP-perganda media promised that they would be fiscally responsible if put into office, and that Wisconsin would become a model of economic prosperity. As Wisconsin Watch reminded us back in 2012.

Walker, on his official website, maintains an archive of press releases, commentaries and executive orders going back to Nov. 2, 2010, the day he was elected governor. The Center’s review found more than three dozen references to Walker’s pledge to add 250,000 private-sector jobs.

The governor’s first State of the State address, on Feb. 1, 2011, was especially unequivocal: “We are defining success for this administration by our ability to shape an environment where 250,000 jobs are created.”

If Walker's policies had truly ignited growth in Wisconsin, it wouldn't be much of a stretch to think we'd have hit 250,000 jobs in 4 years. But that isn't close to what happened. Instead, we aren't even at 200,000 after nearly six years in the Age of Fitzwalkerstan. 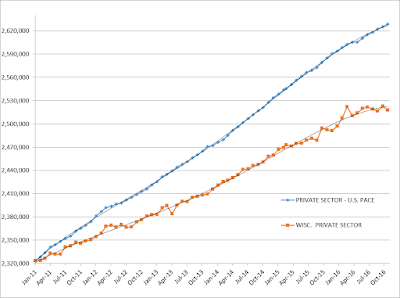 By the way, don't bother trying to find records of Walker's "250,000 jobs" prediction, it's been scrubbed from his website- not unlike how Walker's DNR has scrubbed climate change information from its website. GOPs do this a lot with inconvenient truths.

Oh, and here's a similar WisGOP "job growth" prediction, courtesy of Assembly Speaker Robbin' Vos, where he told the Racine Journal-Times that if Scott Walker was retained in the 2012 recall election, "the [Wisconsin] economy is going to take off like a rocket."

Again, not so much.

Looks like the rocket got one little spark along with the rest of the country in 2013-2014, and then it promptly sputtered out and is now losing altitude.

I haven't even touched on the ridiculous predictions that Republicans made about Obamacare, from it being a government takeover of health insurance (in fact, its main flaws are due to its reliance on the private insurance industry), or Paul Ryan's Pants on Fire lie about how Obamacare is hurting Medicare's solvency (it actually has made Medicare more stable).

My question is- when do Republicans and their hacks in media get held accountable for being wrong? Does it literally take hammering someone in the head for them to admit they've been lying/mistaken? And does that include doing the same to media members who just nod and hold a microphone while Republicans throw any kind of bullshit against the wall without a follow-up of "You know that hasn't happened and won't happen, right?"

You want a New Year's Resolution that has to be followed through on for 2017? Number 1 on my list is RIGHT-WING ACCOUNTABILITY- of and by the media, and this accountability has to be started by the people, because the 2010s has shown that corporate stenographers cannot be counted on.
Posted by Jake formerly of the LP at 2:45:00 PM