Tens of thousands speak in Madison. WILL DPW LISTEN?

I was one of the 75,000-100,000 people in downtown Madison this afternoon, showing our displeasure with the illegitimate (and already-flailing) president and GOP agenda. 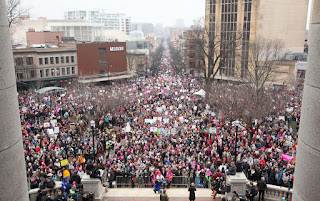 That's me on upper right at the edge of the Capitol lawn.

There's definitely something happening here, and I think people have fucking had it with being told that Trump was elected legitimately or that the GOP agenda is something a majority of people approve of. The numbers of people don't lie, especially in contrast to the pathetic crowds that witnessed Trump being sworn in, and you can already tell that fact is driving Drumpf crazy. Which tells me we need to keep up the pressure and make that boy crack.

I was also fired up by the comments a Teabagging dimwit made on a friend's Facebook page, and I may have hurt his soul a bit by reminding him of his mediocre, dead-end life and BS takes. I feel no shame in being that rough, by the way. I read his comments around the same time that I was finally able to find a parking space downtown (in the 3rd ramp I tried), and as I did, WJJO was blasting this song on their "Nothing but '90s" Saturday. And no song seems to fit better when it comes to describing the typical non-rich, weak-minded Trump voter than this one.

No more the crap rolls out your mouth again
Haven't changed, your brain is still gelatin
Little whispers circle around your head
Why don't you worry about yourself instead

Who are you? Where ya been? Where ya from?
Gossip burning on the tip of your tongue
You lie so much, you believe yourself
Judge not lest ye be judged yourself

Before you judge me take a look at you
Didn't you find something better to do?
Point the finger, slow to understand
Arrogance and ignorance, go hand in hand

It's not who you are, it's who you know
Others lives are the basis of your own
Burn your bridges and build them back with wealth
Judge not lest ye be judged yourself

And right before that, JJO was blasting this great one from my college days.

Which led to me think- maybe what the WisDems need more of in the Age of Trump and the Age of Fitzwalkerstan is a whole lot less of "they go low, we go high." Those people think that 2010s politics is still some kind of friendly debating society, and that appealing to reason is all you need, with the party decision-makers being political lifers in suits.

Maybe the Dems need a lot more White Zombie/Metallica listeners that have worked real (and often crappy) jobs in real places, and are willing to tell the Walkers and Ryans and Trumps of the world "FUCK YOU, STOP LYING AND STOP BEING A FASCIST PIECE OF CRAP!" and willing to (figuratively) break the baseball bat over the heads of liars and scumbags, and outwardly taking on the GOP-perganda lie machine on Wisconsin's AM radio station. Who cares if the bluntness and confrontation hurts the feelings of a few soccer moms? Things are unacceptable today, and playing patty-cake with these GOP piles of shit will not succeed.

You can't deny the energy and feeling of "You will NOT pull this bullshit anymore!" that permeated the Capitol Square this afternoon. And it's well past time that the DPW stop "trusting the data" and start listening to what the people are doing and saying. It feels like the door is opening to a large-scale awakening and uprising against the regressive GOP, and people are done with laying back and "trusting in the system/trusting in the leaders", especially after doing so failed in the 2016 election.

The Dems and the DPW better recognize, join in and ride along, instead of trying to blunt this energy by trying to put it through the "proper channels", because the rules have changed.
Posted by Jake formerly of the LP at 8:41:00 PM