Walker Admin tries to spin sucking less as success. It's not

As Gov Walker's budget address and inevitable re-election campaign nears, his Department of Workforce Development used the recent occasion to release another bit of propaganda trying to convince Wisconsinites that things are doing great in Wisconsin.

That sounds impressive...until you actually look at the recent state-by-state jobs report that these statistics are drawn from. Sure, Wisconsin added 3,000 manufacturing jobs on a seasonally-adjusted basis in December, but we had actually lost 400 jobs in manufacturing in the 11 months before then.

In a similar vein, many Midwestern states saw tepid job growth throughout 2016.

If you didn't know better, you'd think Wisconsin looks pretty good from this perspective, coming in 3rd out of 7 Midwest states for private job growth last year. But here's the problem. Wisconsin didn't rise from 6th to 3rd on this list because our job growth improved form 2015 (it actually declined from 1.28% to 1.16%), but did so because most of the other Midwest states fell by more than we did.

Those declines back up a theory I have mentioned before- where the slowdown in the Midwestern economy could help explain why enough people were angry enough to vote for Donald Trump out of frustration (gee, thanks guys!). Pennsylvania also works in this theory, as their private sector job growth was a measly 0.71%, behind all Midwestern states except Iowa and Illinois.

And even with Wisconsin moving "up" on the list of Midwestern job growth, we still badly trail most of our neighbors in job growth since 2010 because of the hole that the first 5 years of the Age of Fitzwalkerstan put us in. 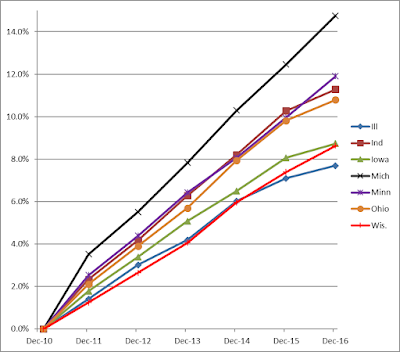 So don't get tricked by the Walker Administration's spin jobs trying to intimate that "it's working" and that Wisconsin is some kind of Midwestern economic leader. When given the long view of Scott Walker's reign of error, nothing could be further from the truth. And saying "We're sucking less than the other guys over the last year" isn't something to hang your hat on- it's like saying "Well, the Pack did better than the 3-13 Bears this season."

LET'S DEMAND MORE out of how this state is performing, shall we?
Posted by Jake formerly of the LP at 8:46:00 PM