When the Packers wrapped up the division title against the Lions last Sunday, it culminated a run that few of us expected when the Pack was 4-6 and flailing before Thanksgiving. And the Journal-Sentinel reminded us that one of the biggest benefits from the team running the table goes to the Green Bay area economy.

Of course, other NFL cities hosting playoff games will reap a similar happy windfall. But the impact on Green Bay is unique, given the size of the city (population 104,057), the seating capacity at Lambeau Field (81,435, including standing-room), and the number of hotel rooms available in Brown County (about 4,300).

And that $14 million is just the dollars that can be counted. [Greater Green Bay Convention and Visitors Bureau President] Brad Toll said it's impossible to put a price on the value an extra nationally broadcast game brings to the community. Not just images broadcast inside the Lambeau bowl but also from the video snapshots network crews often produce in the days before the game to give viewers mini profiles of northeastern Wisconsin. These can be profoundly beneficial from a marketing perspective, even if images at this time of year might be of fishermen sitting on buckets on the frozen Fox River or traffic rumbling down a Lombardi Ave. so salt-stained it's white as chalk. It doesn't matter. It all puts Green Bay in people's minds, and may lure them into swinging through the city.

"That is advertising we can't afford, especially on a national stage," Toll said.

Inside Lambeau Field Monday, employees buzzed about prepping the field and stocking concessions for a game that wasn’t even on the schedule 12 hours earlier. That didn't mean they had not prepared. Lambeau commissary manager Mike Kane said last week he put in a provisional order for 238 kegs of beer to bolster what's already on stock. He said he didn't have to call the distributor or push some sort of button to tell the trucks to roll Monday morning. He said the distributor knew to fill the order the second Kane did.

Interestingly, this is the first Packer playoff game since the Lambeau Field tax in Brown County was rescinded in late 2015 after raising over $300 million for numerous renovations and expanded seating at the stadium. After some debate over what to do, state legislators refunded $18 million of excess sales taxes to Brown County communities in 2016, But after the one-time benefit on this year's property taxes and possible economic development, there is no further local funding mechanism for Brown County governments to receive taxes from the visitors and extra business in GB this weekend.

Fortunately for Brown County residents, the Packers are planning to give a major addition to the area's property tax base, as the team has been buying up large tracts of land around Lambeau in the neighboring village of Ashwaubenon to create the Titletown District. This $120 million district will include 10 acres of public space, new office buildings, and residential development along with new Packer-related retail, and some of the businesses will open as soon as this Spring. 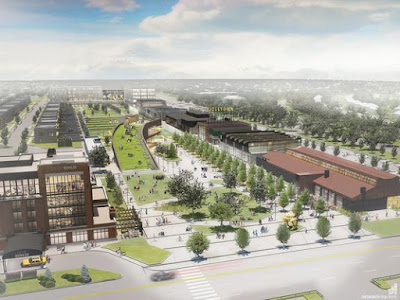 New development like this will likely help Brown County taxpayers who won't be able to have their property taxes offset from funding off of a sales tax that could be levied on all of this Packer tourism spending, and it helps the team grab additional revenue streams to help pay for players and upkeep at the newly-remodeled Lambeau.

About 2 hours south of Lambeau, the Milwaukee Bucks got approval this week from a City committee on the design of the developments surrounding the NBA team's new arena, which is being built just north of the Bradley Center downtown.

The pedestrian mall, if given final approval by the full council, will take up N. 4th St. between W. Juneau Ave. on the north and W. Highland Ave. to the south.

The mall will feature trees and shrubbery and inclined lawns throughout, with a 12,300-square-foot events area in the center. There will also be outdoor dining opportunities and a plaza.

Some ideas presented to the committee for possible activities in the space, which will operate as a year-round public plaza, included farmers markets and art shows, a 4,800-square-foot ice rink, and basketball courts for tournaments. The events area, adjacent to the plaza, would feature live music.....

The city still technically maintains ownership of the plaza as a public right of way, according to Mary Schanning of the city attorney’s office. But it has been leased to the Wisconsin Center District, which has in turn sub-leased it to representatives of the Milwaukee Bucks, who will be responsible for day-to-day management of the mall.

As a public right of way, public access and traffic related easement is mandatory. Still, the Bucks organization can still seek a permit to close the street for private, but limited, purposes. 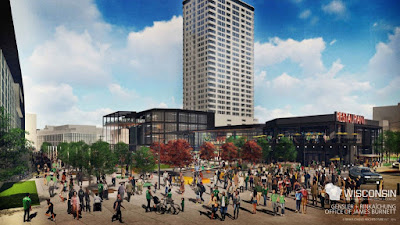 The arena-related development was likely a reason why the Bucks arena project was able to be approved by the State Legislature 2 years ago, and why the final package of TIF money and Wisconsin Center District sales taxes/borrowing was a major upgrade from what Scott Walker's original 2015-17 budget had- a $220 million giveaway of state-funded borrowing to pay for the arena.

Still doesn't mean that there weren't bigger priorities that should have funded for the City/County of Milwaukee over the Bucks arena (or allowing the City/County with the largest amount of tourism spending in the state to receive additional sales taxes from that spending). But with the added development coming together in downtown Milwaukee, along with the team grabbing national attention due to the Greek Freak becoming a legitimate NBA star and the team being a playoff contender, the Bucks arena project is coming together at the right time. The new arena scheduled to open for the 2018-19 season, and it's likely that some of the development along with the pedestrian/live block is ready to go before that, and I'm going to be very intrigued to see how things look when I head to Milwaukee for March Madness in a couple of months.

Whether or not you like the priorities, pro sports are one of the few things that seem to be booming and sparking the Wisconsin economy in 2017, and we'll see more examples of it today.