2017 added a lot more to the Walker jobs gap

As I mentioned last week, today we would find out just how much Scott Walker’s Department of Workforce Development overshot its estimates of job growth for much of 2017. And as the Bureau of Labor Statistics state-by-state report showed, the Walker Administration missed by a lot.

Interestingly, the Wisconsin DWD press release chose to ignore any mention of these lower benchmarks, or even in showing a table with the changes, probably to throw off others from noticing the huge downward revision. Clever work, guys.

In the BLS report, the regular mention of benchmarking also included several other years of revisions, due to a new method of figuring seasonal adjustments.

These points are key, since in Wisconsin, January job gains in many sectors are often reflections of lower-than-normal seasonal layoffs. This is how 62,900 fewer people working in Wisconsin in January 2018 vs December 2017 translates into seasonally adjusted “gains” of 9,200 total jobs and 8,000 in the private sector.

But there’s another reason to look askance at Wisconsin’s jobs figure for January. Let’s remember that the “gold standard” QCEW only has been tallied through September 2017, and that leads to a very noteworthy disparity in these jobs figures. Because Wisconsin’s job growth picked up in the four months that weren’t benchmarked to the gold standard.

That’s quite a turnaround in job growth over the last 4 months…if it’s real. And the huge downward revision of the last benchmarking to the QCEW indicates that it’s probably not.

The downward revisions also means Wisconsin continues to lag much of the Midwest when it comes to job growth, using these month-by-month reports for all of 2017. And at the top of the list is Dem-governed Minnesota, which continues to dramatically outpace us.

Lastly, these downward revisions blow the Walker jobs gap much wider, now up past 130,000 jobs, even with the rosy jobs figures from the last 4 (non-“gold standard”) months. Also note how much different these charts look compared to what I had in yesterday's post. 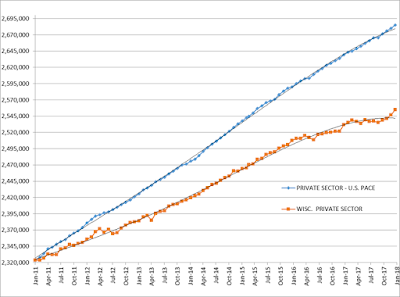 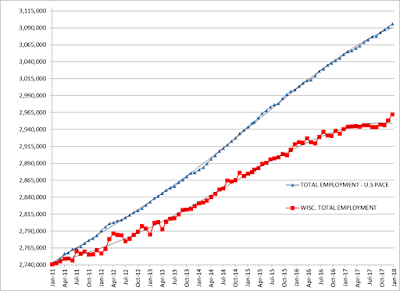 See how Wisconsin’s already-lagging job growth has flattened out since the end of 2015? If someone leading the Packers, Brewers, Bucks or Badgers would be this far behind the competition for 7 years, and with things getting worse as the years go on, fans wouldn’t accept the guy getting a 4-year contract extension. They’d want that guy FIRED.

So why wouldn’t we do the same with our Dropout Governor?
Posted by Jake formerly of the LP at 6:57:00 PM