After the annual delay due to benchmarking, we’re now caught up on Wisconsin’s jobs reports after today’s release by the Wisconsin Department of Workforce Development. And Scott Walker and most other state Republicans were talking up this part of the report.

Place of Residence Data: Wisconsin's preliminary seasonally adjusted unemployment rate for February 2018 reached a record low of 2.9 percent, down 0.2 percent from January's rate of 3.1 percent, and 1.2 percentage points lower than the national unemployment rate of 4.1 percent. The previous record-low state unemployment rate of 3.0 percent was reached in July 1999. Wisconsin also reached a record high for the number of people employed in the state, with 3,068,200 people employed, while the state's total civilian labor force also reached a record-setting level, with 3,161,000 people considered actively employed or actively pursuing employment and part of the state's labor force. Wisconsin's labor force participation rate also increased from 68.5 percent in January to 68.6 percent in February 2018.

Wow! We’re in a record boom in Wisconsin! What, you're not noticing it and being eternally grateful?

If you answered “No,” there may be good reason why you might not be feeling all of these good stats. Remember that jobs reports have two components- a payroll survey (which tracks the number of jobs are reported by employers in the state), and a household survey (which tracks Wisconsinites that have jobs, and those who are searching for jobs).

So when GOP hacks talk up the “record low unemployment” in the state they’re talking about the household survey, and that’s an important distinction to bring up, as the amount of people “working” in the state has tended to differ from having the jobs actually be located here.

For example, look at the difference in Wisconsinites that are listed as “employed” since the start of 2017, and the amount of jobs added in Wisconsin since the end of 2016.

Now that may mean a sizable amount of Wisconsinites are finding “gig jobs” and/or working out of state. Or it may mean that the “employment” and labor force stats are being overestimated by Walker’s DWD, like they were to a ridiculous degree in 2017.

In the last 2 months, Walker’s DWD says that the amount of people “employed” in Wisconsin has risen by 10,800 while the labor force has gone up by less than 2,750, dropping the unemployment rate from 3.2% to 2.9%. One of those numbers seems legit, and it isn’t the amount of people employed. 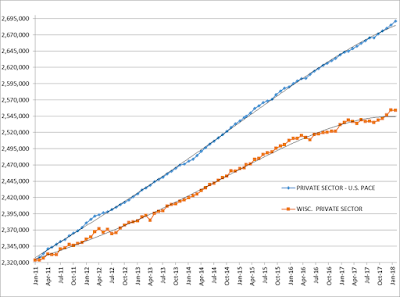 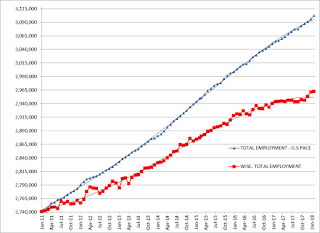 The one bright spot of the payroll side of the report showed that 2,500 new manufacturing jobs were allegedly added in Wisconsin for February, and January’s totals were revised up by 700. And if you’ve paid attention in the past, your immediate reaction to that stat should be “BULLSHIT!”

As UW-Madison’s Menzie Chinn pointed out, the subsequent release of the “gold standard” Quarterly Census of Employment and Wages (QCEW) has consistently caused the Walker DWD’s “strong gains” to be revised down sharply over the last 3 years. 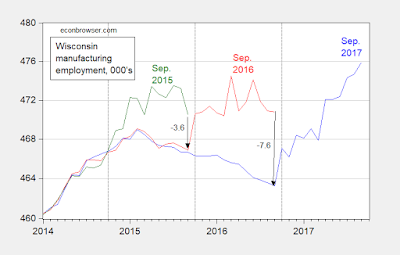 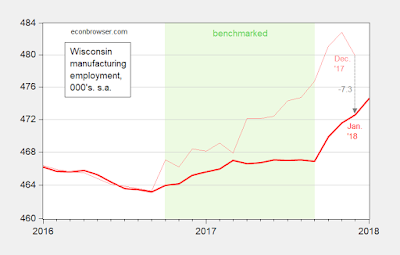 Magically, manufacturing jobs are up by 10,900 in Wisconsin since that benchmarked figure for September. And since Professor Chinn isn’t Koched up or receiving a Bradley Foundation “grant” to get his job at the UW Department of Economics (unlike Noah Williams, whose “research” Walker tried to talk up yesterday), you see why I’m intensely skeptical those reported gains have actually happened.

After overshooting on these estimates for the last few years, I can’t help but think these DWD errors aren’t accidents, but instead another arm of Scott Walker’s 2018 election campaign. That’s not what our tax dollars should be going toward, and it’s well past time that people with media megaphones start calling that out, along with Walker’s constant taxpayer-funded campaign trips around the state.

But in fairness, if you 24 hours where you had to settle a lawsuit for $19 million due to negligence at a youth prison (that was covered up for two years) and was found to be violating state law for failing to hold elections for vacant legislative seats in a timely fashion, I suppose you’d look anywhere for good news to spin and cling to. So that’s why I expect Walker and the WisGOPs to sell this “2.9% unemployment” claim for as long as they can….until that also becomes untrue.
Posted by Jake formerly of the LP at 5:42:00 PM