Some of your potholes won't be filled because of Foxconn

You’ve probably seen the headlines this week, which shows that the Fox-con continues to funnel resources away from the rest of the state in a time when roads are crumbling everywhere else.

A new road project serving the $10 billion Foxconn plant in Racine County could reduce funding for other state roads by as much as $90 million in the current budget, according to the Legislative Fiscal Bureau.

The reduction leaves state highway rehabilitation funding as much as $870 million short of the $2.4 billion per biennium the Department of Transportation estimates is needed to maintain road conditions at current levels for the next decade.

UGH! As if we didn't have enough cracks in the highway, now we're deferring things even more just to pork things up in Robbin' Vos's district to help Foxconn?

The Democratic leaders of both houses of the Legislature released a joint statement criticizing the Walker Administration's lack of investment in highways throughout the state, and their decision to divert money to the region where the Foxconn plant is supposed to be built.

“If it wasn’t clear by now, as long as Governor Walker is in office, our roads will never be fixed. The Governor has failed to address transportation funding for 7 years, and now he is prioritizing Foxconn over desperately needed road repairs all over the state,” said Rep. [Gordon] Hintz. “The Walker Administration can misrepresent the numbers and pretend they’re somehow magically able to do more with less, but the reality is we are underfunding the State Highway Rehabilitation Program by $800 million per biennium. Instead of admitting our funding shortfalls and working to fix this problem, the Governor had his DOT bureaucrats hastily throw together a letter full of campaign talking points. At the end of the day, the Walker Administration is giving more money to Foxconn and less money for our local roads.”...

“Wisconsin residents should be outraged that up to $90 million in funding designated for state highway projects is being diverted towards Foxconn,” said Senate Democratic Leader Jennifer Shilling. “While potholes and crumbling roads and bridges continue to plague our local communities, Foxconn reaps the benefit from the largest taxpayer handout to a foreign corporation in U.S history. The Walker administration and legislative Republicans need to wake up and realize they created this transportation mess and they can no longer hide from it.” 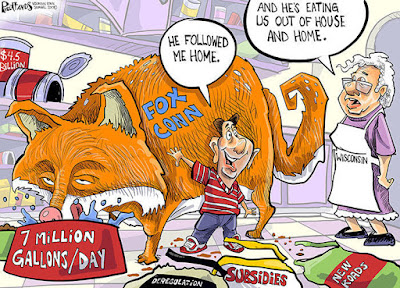 Here is the LFB analysis that prompted Hintz and Shilling’s statement. The LFB notes that the Walker Administration is trying to get a federal grant to offset this road work in the Foxconn-sin region in Racine County. And a lot of it is related to the $134 million that the Walker Administration shifted to SE Wisconsin without any public hearings or legislative oversight. But if WisDOT doesn’t get it, state taxpayers will have to pay for it all.


Subsequent to the passage of Acts 58 and 59 [the state budget and the Fox-con package], the Department submitted a November, 2017, federal (INFRA) grant application requesting $246.2 million related to I-94 North-South corridor project. Any grant received by the state is likely to be announced in the spring or summer of 2018. The grant application, while outlining the potential work to be completed on the I-94 North-South corridor project, also indicated that the state would fund additional work on other state and local roads associated with the Foxconn development project that could cost up to $134.0 million. In November, 2017, DOT entered into jurisdictional transfer agreements with Racine County and the Village of Mount Pleasant to transfer the affected local roads to state jurisdiction, which was required in order to allow the use of SHR program funds on what had been locally administered highways. Projects listed in DOT's master contract schedule through February, 2019 (as shown in the attachment to this memorandum), indicate that between $102.0 million and $122.0 million in SHR work has been tentatively scheduled on these local roads and adjacent state highways. Because the current master contract schedule extends only through February, 2019, the remainder of this Foxconn-related project work would likely be scheduled for let later in 2018-19 and in the next biennium. Under the jurisdictional transfer agreements, up to $23.0 million in local funds ($11.5 million from the Village of Mount Pleasant and $11.5 million from Racine County) to partially offset these costs. The Village of Mount Pleasant amount would be required to be paid by no later than January 1, 2023. Racine County's amount would be required to be paid from the receipt of county taxes from the Village of Mount Pleasant's TIF district #5, only between the time of TIF closure and 2043, provided that the district closes by 2043.

Walker’s DOT claimed in early February that the state had saved $127.2 million from projects in FY 2017, and therefore, there was no money being taken away from other projects (click here to read it, try to not to puke from the propaganda and condescension).

The LFB read the letter, and in its kind, non-partisan manner said that the Walker Administration was LYING ITS ASS OFF.


However, the SHR funding level established by the Legislature each biennium is the baseline level of program work that is expected to be completed in that biennium. In turn, the concept of "project advancement" is then associated with efficiencies or savings on that amount of baseline work. By not accounting for the "above base" level of funding in establishing its initial SHR project schedule, DOT is able to use the above base amounts of $54.5 million in 2017 18 and $50.3 million in 2018-19 to help draw the conclusion that no SHR projects previously planned for the current fiscal year were delayed due to the use of SHR funding for Foxconn-related roadwork. This conclusion is largely an artifact of using the lower base amount of funding in establishing the SHR schedule, as opposed to establishing a project schedule that matches the program funding provided by the Legislature and the Governor.


Let me translate for you- “Nice try, Walker Admin. Just because you are spending $105 million more in 2017-19 than the base amount, it doesn’t mean you now have extra money lying around because you shifted $102 million-$122 million of that funding to Foxconn highway projects. You still are limited to $1.62 billion for these projects over these 2 years, but now only $1.5 billion are left for projects in the rest of the state, since you sent some of that money to the Foxconn-sin region.”

The LFB acknowledges that there have been some savings in project costs so far, but it’s nowhere near enough to pay for all of the Foxconn road work.

While not noted in the Department's response, through December, 2017, DOT has realized additional SHR program let savings of $23.9 million, relative to the 2017-19 baseline of SHR project work, as established under the Act 59 funding level. This amount, which presumably resulted from the Department's actions in conjunction with market factors, is available to advance previously unscheduled SHR project work. These savings would be available to mitigate some of the effects of using SHR program funding to fund previously unscheduled work related to Foxconn….

So the bottom line is that barring some kind of miraculous money parachuting into the state from DC, or some kind of magic savings that pop up in the next year (don't bet on it), there will be additional cuts to highway projects and maintenance as a result of the Walker Administration's decision to move highway money down to Foxconn.

Which means those of us outside of Foxconn-sin need to get used to more potholes and a lot of this when we travel the highways this year.