Spending and wages both stalling out in US


Since Americans started to get larger paychecks in February, the theory would be that economic activity would pick up, because some of those gains would be spent. But it sure didn’t happen last month.

It was the third consecutive month of declining retail sales, the Commerce Department said Wednesday, though they're still 4% higher from a year ago. Shoppers have opened 2018 with a cold spell after robust spending gains in the months leading up to the holidays….

Those declines at stores are a bit alarming because the huge jobs report from Friday said that over 50,000 jobs were added in the retail sector in February (on a seasonally-adjusted basis). I have a hard time believing those jobs will stick around if retail sales continue to fall....if they truly were added to begin with.

So what’s the problem? Another economic report from Tuesday might give a clue.

That’s the 6th month out of the last 7 where average hourly wages have failed to rise above the rate of inflation, which means workers are basically back to where they were in March 2017. 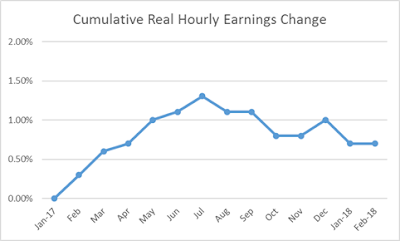 And remember how we were hearing 6 weeks ago about the prospects of a major blowout for 1st Quarter GDP? Those included references to the Atlanta Fed projecting growth of 5.4% to start 2018 their GDP Now forecasting, which would be the highest rate in nearly 15 years.

Well, the DOW was also 1,300 points higher then, and a lot more economic data has rolled in since then. And take a look at what’s happened to the Atlanta Fed’s forecast since then.

That 5.4% has nearly been cut by 2/3 to 1.9% now, and a big reason why is that consumption growth has stalled out, which is reflected in the slipping retail sales.

Hmm, maybe we shouldn’t have given corporations added incentives to hoard profits and have stock buybacks reach record levels due to the GOP’s Pierce of Shit tax plan in DC, huh?

I’ve often expressed concern over what would happen if heavily-indebted Americans would stop spending like it was the 2000s, because that was the only reason growth “accelerated” in 2017. If that spending is now slowing down despite the alleged sugar high that GOP tax cuts were supposed to give the economy for the first part of 2018, what happens in a few months when the buzz wears off? 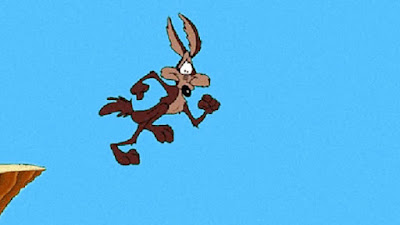