It seems a lot of people want to think of Texas as the new prototype in America. After all, it's getting 4 more seats in Congress due to the new Census, and grew by over 20 percent in the last 10 years. They're also held up as some kind of example of how right-wing economics works, since they have zero state income tax, have a low cost of land and labor, and are heavily deregulated. In fact, the newly-elected Gov. Dropout has told Texas guv Perry "Wisconsin is coming after you," because he thinks Texas is a leader that we should follow.

I understand that things in Walker World are typically upside down from reality in general, and it especially holds true in this case, because if we become more like the Texans, we'll be falling from where we are now.

Dont believe me? Go to the numbers:

So basically, Texas is poorer with lower income growth, has more unemployed and much more uninsured, and is significantly less educated than Wisconsin. And THEY'RE the ones we're trying to follow? REALLY?

Well, Scott Walker's policies will certainly bring down our standard of living to Texas levels, that's for sure, so I can see why he views it as a goal. And especially when you consider the acheivement and educated-hating dead-enders that voted for Gov. Dropout, I guess it does add up, now that I think of it.

But for those of us who do give a crap about the future of Wisconsin, maybe not such a good plan. Much like the football game I'll witness on Jan. 1, I think you'd better go with the hard workers from Wisconsin over the Texasses.
Posted by Jake formerly of the LP at 3:42:00 PM No comments:

Poverty rampant in Wisconsin! Or not...

I love the Journal-Sentinel's attempt at alarmism in today's paper. They shout in huge headlines about how POVERTY ROSE ALL OVER WISCONSIN IN THE 2000s! You mean the top of the tech bubble had fewer poor people than the pit of the Bush Depression? I am blown away by that correlation.

Nationwide, Wisconsin's increase is above the national average of 1.4%, so work needs to be done, but the U.S. average of 12.9% is well below Wisconsin's 10.4%, and you want some real fun, check out the poverty in those "low-tax" Confederate states. Yeegads!

One last point, note that the WOW Counties around Milwaukee have the lowest poverty rates, while Milwaukee is 3rd-highest at 18.0%. You think the fact that Milwaukee is still at the top in city vs. suburb segregation might have a bit to do with that? It's easy for Waukesha County to be low-poverty when they refuse to build housing developments for lower-income people in their communities, like they did in New Berlin. Maybe if these people stopped hiding from the real world, they might actually start to do something about this serious problem that is killing life in the 414 and 262 area codes.

And also, note the high rates of poverty in the isolated Indianhead region of NW Wisconsin. Scary stuff, and it tells you that poverty is anything but an urban issue.
Posted by Jake formerly of the LP at 8:51:00 AM No comments: 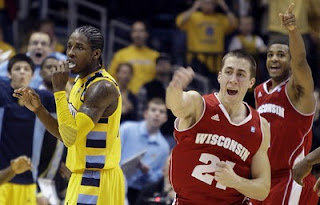 Sorry to spoil your Super Bowl, ND Junior. Oh wait, no I'm not.

P.S. As passed on from a close personal friend, this article will explain my rip of Marquette...well, in addition to letting Silly Scotty Walker into their school.

I'm always thankful that I went to a school that doesn't waste its time looking over its shoulder in envy at other places, and instead works on getting themselves better. Kinda like how Milwaukee suburb boys spend their entire lives comparing themselves to others, and dooing the best they can....to make sure they knock down achievers to their level.

Guess that's why I can't relate to Marquette or WisGOP mentality, now isn't it?
Posted by Jake formerly of the LP at 3:49:00 PM 1 comment:

After caving like that and continuing the regressive tax structure that has done nothing but drive up deficits and allow the affluent to cash in profits at the expense of employees, I have no choice.

In addition to the failure to let the taxes on the rich rise to the levels that were agreed to when these idiotic tax cuts were passed 7-9 years ago, the Social Security move may be worse. Remember, Social Security takes in more revenues that it spends out now, which "reduces" the current year fiscal deficit, and makes for an "increase" in the Social Security trust fund. Cutting those taxes means that part of these advantages goes away, and speeds up the timetable for when Social Security benefits would have too be reduced or modified in another way.

In ther words, Obama's proposal plays right into the hands of people who want to sell off and cut Social Security by increasing the possibility of a "crisis" in a program that really isn't in danger. How Obama couldn't at least trade keeping the lower Bush tax rates on income for the rich with raising the cap on Social Security taxes to shore it up for another 60 years is beyond me.

Barack, babe, you were amazing a couple of years ago. And you've done some good things in the last 22 months, probably better than a lot of people would lead others to believe. But now the shine's gone off and you've shown who you really are. With that in mind, I think I'm going to explore other politicians...probably for good.

Memo for Feingold, Kohl, Baldwin, and Moore. We are watching, and we will make you pay if you let this bad agreement go through. But if you stop it, we will be in your corner for the rest of your careers, as this will not be forgotten. (well, except for Russ, we'll always be in your corner regardless of what you do, but I'd be surprised if he didn't vote against this tax policy anyway)
Posted by Jake formerly of the LP at 7:04:00 PM No comments:

I wanted to give props to the guys at Ultimate Arts tatoo, who hosted the Tats for Tots event. They received nearly 700 toy donations for the Holidays, and gave away a whole lotta tatoos in the process. 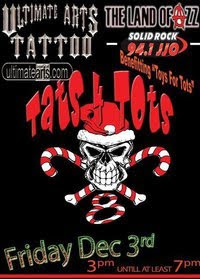 Not a tat guy myself (I'm too much of a wuss and look far too conventional for it to work), but recognize a great act from a local company, and felt it appropriate to give them notice.
Posted by Jake formerly of the LP at 9:24:00 AM No comments:

Nice to know Wisconsin Republicans are changing politics from the way they used to be in our state.

1. Scott Walker breaks Jim Doyle's precedent by turning the proceeds of the Inaugural Ball from a fund raiser for the Boys and Girls Club, and transforming it into a WisGOP fundraiser. He and his boys just get classier by the day.

2. Senator-elect "new face for Washington" Ron Johnson has chosen a former flunkie for Bush's Homeland Security secretary and current D.C. lobbyist for his chief of staff. And unlike Russ Feingold (who promised to hire Wisconinites as his D.C. staffers and like most of his promises, kept to it), RoJo takes a Virginia guy who's probably living in one of those D.C. d-bag suburbs that's built on people who bilk the government for contracts and tax breaks.

If you were foolish enough to think these boys would give some kind of change from the corrupt system we're polluted by, they're laughing at you all the way to the exclusive boys' club bank. HAHAHAHA!!! The only change will be to take the current rotten system, make it worse, and divert the money to their guys instead of who was there before.

I wouldn't be too bothered by the actions of you selfish naifs, but your idiocy hurt us too. We'll accept your apology over these next 2 years until you get a chance to formally repent.
Posted by Jake formerly of the LP at 7:13:00 PM 2 comments: