Remember how the Walker Administration was blabbing throughout the late Summer about the state's high ranking in the Philadelphia Federal Reserve's coincident index that compared the economies of all 50 states? Well, we got the last two months of Philly Fed data today, and interestingly, no press release followed from the Governor's Office. And the numbers show you why, as Wisconsin is back behind a couple of other Midwestern states for growth in this index, and is also below the national rate.

Also interesting is that the Philly Fed index had some revisions, which didn't change Wisconsin's ranking all that much, but seemed to increase Illinois a bit, and dropped Iowa some. But what didn't change is the fact that Wisconsin continues to be the worst economy in the Midwest since Walker and WisGOP came to power in January 2011. 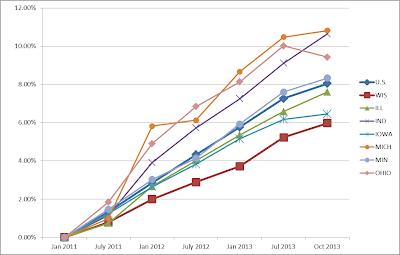 Hmm, wonder if anyone in the national media brought up that record of failure to ol' Scotty on his book tour out East? Somehow, I don't seem to recall the topic being broached- almost like the Walker folks wanted to hide it from people. You know, kinda like how they tried to let this release from the Philly Fed survey go unnoticed, unlike the fluky good numbers they were trying to prop in September.