How Milwaukee's Bradley Foundation created a propaganda machine for WisGOP

Right before November's elections, the online hackers at Anonymous got into the files of Milwaukee's Bradley Foundation. It got a few minor headlines at the time, but otherwise fell on deaf ears in the state media.

Until this weekend, when the Milwaukee Journal-Sentinel's Dan Bice got a hold of the documents and organized them into a long, in-depth story in the paper. This article should be required reading when it comes to understand how right-wing oligarchs invested millions of dollars into taking control of the formerly progressive state of Wisconsin, and how those oligarchs launder money to set up pop-up organizations that create a machine of propaganda that has perverted the ideas of fairness and democracy that we are supposed to hold dear.

Here's an example on how this Bradley Foundation propaganda infrastructure started, and works today.

That meant helping support Media Trackers, a website that distributes negative information on liberals and certain Republicans, and Wisconsin Watchdog, which published nearly 400 stories attacking the John Doe investigation of Walker and his GOP allies over their campaign spending in the recall elections. It also has poured millions of dollars collectively into two think tanks, the MacIver Institute and the Wisconsin Policy Research Institute.

And American Majority took in more than $1.6 million from the Bradley Foundation from 2011 to 2015 to identify and train "pro-freedom" individuals interested in running for office or participating in the political process. In just four years, the group trained more than 6,000 local political leaders and helped candidates run for everything from municipal judge to state lawmaker.

"From that group, there were 651 new leaders in state or local office, including whole cohorts of candidates who, together, overturned school boards and county boards, and village boards, and made them newly accountable to the citizens," wrote Janet Riordan, then a Bradley staffer in 2015 and the spouse of former conservative talk show host Charlie Sykes, the editor of WPRI's "Wisconsin Interest" magazine.

But because the Bradleys make PR-based donations to organizations like the Milwaukee Symphony Orchestra and the Milwaukee Public Museum, they are allowed to be considered a "charity", which means that the City of Milwaukee doesn't collect a dime in property taxes from this building near the Lakefront on Franklin Place. 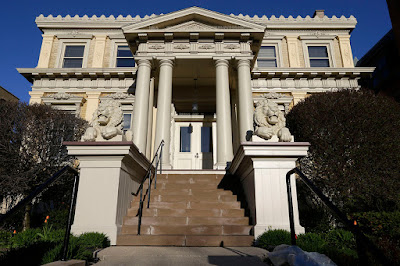 What evil lurks beyond these walls...

Then combine the donations to the synergies that the Bradleys created with the state's corporate-owned "legitimate" media. This included Bradley Board member Charlie Sykes being allowed 3 1/2 hours a day for 20 years on the Packers' and Brewers' flagship, and a weekend talk show on JournalComm's Channel 4 which frequently featured guests and commentary from organizations like Media Trackers and WPRI (liberals need not be shown). The Journal-Sentinel hired WPRI hack Christian Schneider to become their main editorial columnist. The AM 1130 Clan features hours of free media with these Bradley front groups and repeats Bradley GOPperganda verbatim - including Bradley hacks being allowed to be fill-in hosts. WILL flack Rick Esenberg is often portrayed as a "Marquette Law Professor" when in fact he is fronting for a Bradley Foundation lawsuit mill designed to damage public education.

And there is a frequent revolving door between Bradley Foundation organizations and/or today's Wisconsin GOP. The most obvious had former Bradley CEO Michael Grebe, who served as Scott Walker's campaign chair for all of Walker's statewide and national campaigns between 2010 and 2015. But it's far from the only one. For example, right after the 2016 elections, Brian Sikma went from being the head smear merchant at Media Trackers to being a policy advisor to GOP State Sen. Dewey Stroebel, while Green Bay talk show host Jerry Bader took over Sikma's propagandist position at Media Trackers, while staying on the air at AM 1360 to spew Bradley propaganda. Let's also not forget how Patrick McIlheran wrote Bradley-fueled crap for years for the Journal-Sentinel, and then was hired by Sen. Ron Johnson after (mo)Ron was elected in 2010.

And just last month, M.D. Kittle went from throwing shit at the John Doe investigation via Wisconsin Watchdog and being a fill-in host on AM 1130, to the newest hire for communications at the MacIver Institute. And yet Wisconsin's media portrays these organizations as either independent outlets or individual right-wing groups, and fail to tell the citizens of Wisconsin the truth that many of the "experts" they interview are merely mouthpieces granted a nice title by Bradley oligarchs.

I'm just skimming the surface of what Bice's article goes into. That database also includes an intriguing group of large donations from the Bradley Foundation to the University of Wisconsin campuses in Milwaukee and Madison for "research", which seems to smack of trying to rig the direction of that research, and install right-wing hacks into giving "alternative views and findings" at those legitimate institutions. A good way this works is UW-Madison Economics Professor (and former Marco Rubio campaign consultant) Noah Williams producing an easily-debunked pile of crap that tried to show positive results about a WisGOP corporate tax cut that has cost over a $1 billion in revenue.

Combined with Governor Walker's calls for UW profesors to teach more and research less, and you can see where Bradley-backed BS could replace legitimate findings and relaying of real-world results when it comes to what we base our policy decisions on. The point behind the combining of the Bradleys' propaganda machine and attempted academic capture seems twofold.

1. Change the frame of what is considered good policy, and intimidate mainstream media into accepting right-wing garbage as legitimate arguments.

2. Confuse the average voter into not understanding which facts are real. This often means they then vote for Republicans out of superficial resentment against "elitist liberals" (helpfully promoted by AM talk radio stations getting their lines from the Bradleys) or by clinging to "knowns" in their lives such as guns or religion.

It is not much different than what Karl Rove famously told journalist Ron Suskind in 2004, as George W. Bush was running for re-election.

The aide said that guys like me were "in what we call the reality-based community," which he defined as people who "believe that solutions emerge from your judicious study of discernible reality." I nodded and murmured something about enlightenment principles and empiricism. He cut me off. "That's not the way the world really works anymore," he continued. "We're an empire now, and when we act, we create our own reality. And while you're studying that reality -- judiciously, as you will -- we'll act again, creating other new realities, which you can study too, and that's how things will sort out. We're history's actors . . . and you, all of you, will be left to just study what we do."

This creation of "alternate facts" and "alternate reality" has enabled oligarchs like the Kochs and the Bradleys to use GOP puppet politicians to pass more regressive legislation (especially at the state level), and grab more money and power at the expense of the rest of us. And until we forcefully unmask these billionaire slimeballs and their henchmen, and we break the Bubble of Bullshit they create with ACTUAL FACTS AND TRUTH, our state and our country will continue to decline under the control of oligarchs like those that run the Bradley Foundation.