As local budget season heats up, many are looking at what happens in the City of Milwaukee, where Mayor Tom Barrett has proposed reducing the number of police and fire fighters through attrition. This understandably has many people concerned over staffing levels for emergencies, and whether the City will become less safe as a result. But if you look into the actual reasons behind the fiscal issues, you’ll see that many of the issues are the result of politically-motivated actions and budget cuts at the GOP-controlled State Capitol in Madison, and they either need to step up, or be pushed out in favor of some people who will actually try to improve things for the state’s largest city.

We know that the union-busting Act 10 was bad enough for the state’s economy and ability to attract quality candidates to public service due to the take-home pay cuts and lack of bargaining power. But Bruce Murphy of Urban Milwaukee notes it’s even worse for the City of Milwaukee, because of a Walker/WisGOP loophole that rewarded Milwaukee cops and firefighters for their political support in 2010.

Pretty much every employee of school districts saw their benefits cut and most have lost their collective bargaining rights. But cities were an entirely different story because Walker exempted his political allies, the fire fighters and police, from Act 10. Suddenly all his justifications for the law didn’t apply. That squeezed every city, which had to live with constraints on property tax increases but was still left with rising wages and benefits for police and fire, who continued to use collective bargaining to drive hard bargains.

And no city was more squeezed than Milwaukee, because it is the state’s biggest city, with the most poverty and crime, and the most need for police. And that is part of the back story to the city’s current dilemma, with the Public Policy Forum declaring the Milwaukee’s revenue structure “is broken”, and Barrett proposing a draconian 2018 budget that cuts the number of fire fighters (by 75) and police (by 33). A “primary culprit” for these budget cuts, the PPF concluded in its latest report, “is a spike in the employer pension contribution, which increases from $61 million to $83 million.”

This is despite the fact the number of police and fire fighters declined slightly, by four percent, during these six years. Meanwhile the number of other city employees actually grew — by less than one percent. Yet the cost of police and fire benefits ballooned by 50 percent during this period, from $86.8 million to $130.2 million, while the cost of benefits for all other city employees rose by just 3.9 percent, rising from $53.3 million to just $55.4 million.

Meanwhile, Milwaukee Police are costing City taxpayers and squeezing the city budget in another way beyond their rising special benefit costs, as we saw in this Journal-Sentinel article today.

Police misconduct has cost Milwaukee taxpayers at least $17.5 million in legal settlements since 2015, forcing the city to borrow money to make the payouts amid an ever-tightening budget.

That amount jumps to at least $21.4 million when interest paid on the borrowing and fees paid to outside attorneys are factored in, a Milwaukee Journal Sentinel analysis found. …

[A $2 million] pending wrongful imprisonment settlement could push the total payouts to settle lawsuits so far this year to $9.4 million. That would be the most the city has paid out in a single year since at least 2008, according to the Journal Sentinel analysis.

The city is self-insured, meaning taxpayers bear the costs of any settlement.

Because the city only budgets $1.2 million a year for claims and lawsuits, it has resorted to borrowing to pay for the large settlements. Aldermen have approved borrowing $16.3 million to settle four lawsuits, and will soon vote on whether to borrow another $2 million to pay a fifth.

And of course, that borrowing has to be paid back over time, which adds another expense for the city to deal with in future years. As non-PC as this sounds, if bad cops are leading to budget difficulties, then why shouldn’t the Police Department be responsible for some of the cuts that would result?

But the larger problem is the lack of money that’s available for the City to pay these extra bills that come from needing such a large amount of police and fire services. As Milwaukee’s Public Policy Forum mentioned, the State of Wisconsin has continually cut the amount of money it sends back to communities in the form of shared revenues, and this is especially true for Wisconsin’s largest city.

In recent decades, the shared revenue program has diminished in force and focus as ad hoc aid has replaced formula funding methodologies. In 1985, the State eliminated automatic shared revenue aid and in 2001 it discontinued the main components of the funding formula. Since 2004, except for one year, annual funding for shared revenue either has remained essentially the same, or has been reduced. In fact, the combined amount of municipal aid and utility payments declined from $719 million in 2005 to $666 million in 2015, and their share of the State’s general fund budget fell from 13% in 1995 to 6% in 2015.

The drop in shared revenue has had a substantial impact on the City of Milwaukee’s finances. In Making Ends Meet, we noted that if Milwaukee’s intergovernmental revenue (of which shared revenue is by far the largest component) had increased at the rate of inflation from 1995 to 2015, then its revenue total would have been 58% higher ($415 million versus the $264 million it actually received). Property tax increases made up for less than 20% of the inflation-adjusted decline in intergovernmental funds during that time.

And this isn’t going to get much better in the next 2 years. Sure, the recently-signed state budget and had a one-time 8.5% increase in local road aids after being frozen for several years, but it added virtually no money for shared revenues to counties and municipalities for general services, 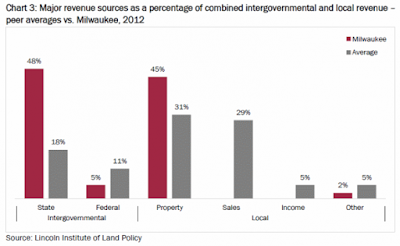 This can't go on.

And before GOP rubes yap about “the trolley”, Jeremy Jannene of Urban Milwaukee noted that loudmouth Alder Tony Zielinski is talking out his backside when he says he wants to use streetcar money to add more cops.

After spending the last press conference attacking Mayor Tom Barrett and two streetcar-related positions in the budget, Zielinski spent this press conference attacking the mayor and a $315,000 budget allocation from the parking fund to operate the streetcar. The catch? Because of the $10 million, 12-year Potawatomi Hotel & Casino sponsorship deal, these streetcar costs are completely offset by the incoming streetcar sponsorship.

Zielinski will propose amendments to eliminate the streetcar budget items, a move he says will result in only 26, not 33 police officer positions being eliminated. The math on that doesn’t check out though, as eliminating the streetcar-related items would presumably force the project to stop, end the Potawatomi sponsorship and cause the federal government to demand the return of its grant for the streetcar…

What are these streetcar budget items? The budget includes $208,000 for the creation of two positions related to the city’s management of the streetcar. In addition, $315,000 is included that is required as a 20 percent match for a grant provided by the federal government to operate the streetcar.

The city will eventually need to pay $3.6 million a year to private operator Transdev to operate and maintain the streetcar. That cost will be offset by farebox revenue, the federal grant and sponsorships. The city isn’t anticipating a budget impact from the streetcar until at least 2021, some three years after it begins operations (and Barrett has said the city is still seeking other sponsors). The streetcar, now known as The Hop, is scheduled to begin operation in November 2018.

The City budget assumes no funding from the state either, so if you’re bitching about the streetcar’s “costs” and saying it’s causing budget problems in Milwaukee, you are either blatantly dishonest, or you have been SUCKERED.

If suburba-GOPs truly give a damn about making sure Milwaukee has enough funding for police and fire fighters, and they’re not going to send more shared revenues to the City because they’d rather their campaign contributors get another tax cut, then the solution is simple – LET MILWAUKEE RAISE ITS OWN MONEY THROUGH A SALES TAX. I’ve said this before, but Milwaukee County is by far the largest generator of tourism dollars for the State of Wisconsin, with nearly $2 billion in direct visitor spending last year. 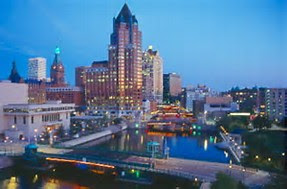 People like coming here. So why don't they pay some of the bills?

It makes perfect sense for those visitors to pay back some of the extra costs and needs that they cause for the City they want to visit. Why should residents of Milwaukee have to pay higher taxes to pay for added needs that they didn’t cause? If suburba-GOPs and others in the state won’t allow the handcuffs to be taken off of Milwaukee to pay for the increased fire and police costs that Scott Walker and WisGOP have imposed on them, then it proves that they really do want to wreck the state’s largest city.

And for what? To say your mediocre selves are better than “those people” and score political points with racist rube voters? That strangling mentality is exactly why Milwaukee and Wisconsin continue to lag behind the rest of the country, and will continue to fail as long as Walker and the WisGOPs are in charge. These anti-urban policies and the “we are immune from the problems we cause” mentality from WisGOP have to be ended.
Posted by Jake formerly of the LP at 7:19:00 PM