As December begins, more signs that November's economy stalled out

As we return to normality from a holiday weekend, we found more signs that any pre-Thanksgiving optimism about the economy and the stock market may be misplaced.

While conventional media tried to portray Black Friday and the official start of the Holiday shopping season as strong, that wasn’t the case inside of the actual stores.

The pullback corresponds with a jump in Black Friday spending online, which hit $7.4 billion, the largest online Black Friday total ever, according to Adobe Analytics….

The drop in Black Friday physical shopping mirrors a year-long share pullback in departments stores including Macy’s, Kohl’s and Foot Locker, all of which are down more than 25% this year. Meanwhile, Amazon, the dominant U.S. e-commerce retailer, has gained about 20% this year.

Brick-and-mortar sales on Thanksgiving Day rose 2.3% from a year ago, resulting in a combined 3% decline for the two-day period, according to the ShopperTrak data.

This structural change may not portend an overall decline in consumer spending, and indeed, we are seeing projections for an increase of nearly 19% for Cyber Monday sales. But a decline in in-store sales can’t be a good sign for the brick-and-mortar stores, which have already closed in large numbers. 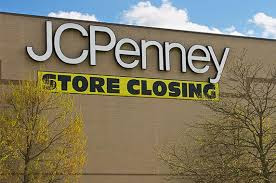 More of this to come?
Those retail jobs are not being replaced outside of the handful of communities that have Amazon warehouses. And you'll pay more through a higher property tax bill if this keeps up.

While we wait for totals from Holiday shopping to find out the state of play for retail and the consumer side of things, we already knew that there were woes in other sectors. One of the biggest drags in 2019 have been in manufacturing, and it continued to fall last month.


Manufacturing activity continued to lag in November amid a decline in inventories and new orders, according to the latest ISM Manufacturing reading released Monday.

Though the level is usually reported as a simple number, it actually denotes the percentage of manufacturers planning to expand operations. A reading below 50 represents contraction; November was the fourth straight month below the expansion level.

Stocks fell on the report, with the Dow Jones Industrial Average off more than 200 points in late morning trading.

If you go into the actual ISM Manufacturing report, it shows declines across the board. 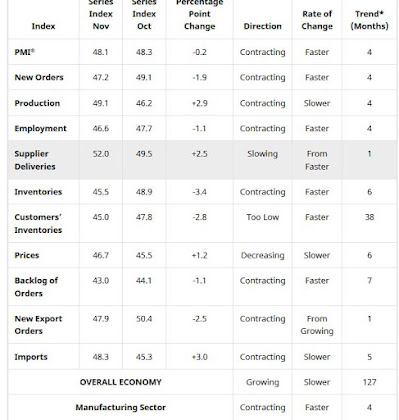 Seeing faster declines in employment, new orders and export orders is not a good direction for the future. Particularly when you realize that November was the month after the GM strike ended, when there should be some kind of bounce-back from that alone. That didn’t happen, which is a major red flag as the year ends.

And later on Monday, we found another blue-collar sector was in decline, after a bad report from the US Census Bureau on construction spending which should decreases across the board.

If anything, those figures understate how bad things are in construction, especially in the private sector. September had a decline of 1.1% in private sector construction spending, and 0.3% overall, and residential construction is down more than $10 billion (2.0%) vs August.

The year-to-date figures for 2019 construction aren’t great either, except for the public sector under “small government conservatives” in DC.

We haven’t seen job losses in construction so far in America- construction firms have added 127,000 jobs in the sector during 2019 (although only 45,000 of those happened between April and October). But with less money being spent in the sector, how much longer are we going to go without layoffs? Maybe we’ll find out on Friday in the monthly US jobs report.

As December begins, it feels like we’re at a critical crossroad that will determine if 2020 marks the end of this now-record expansion, or keeps things moving along. And the signs weren’t great on the first business day of the month.
Posted by Jake formerly of the LP at 8:55:00 PM