Two different US economies - one in depression, one not affected at all.

Wanted to follow up from June's jobs report with more evidence that our economy is splitting even more into two tracks, where the financial and professional industries are surviving our economic recession just fine, but many other sectors were still wrecked. And that was before more shutdowns from COVID-19 came this week.

I'll start by updating a chart that I brought up this week, which illustrated how certain financial industries have barely lost any jobs, while the low-wage service industries have been hammered. Sure, some of those service industries had a rebound in June, with the leisure and hospitality sector accounting for more than 2.1 million of the 4.8 million jobs added back, and retail adding nearly 740,000. But as you'll see, they're still far down compared to the time before COVID broke out.

In fact, there's a common pattern in these sectors where as of June they'd gained back about half (or less) of what they lost in March and April, when much of that part of the economy shut down to try to deal with COVID-19. 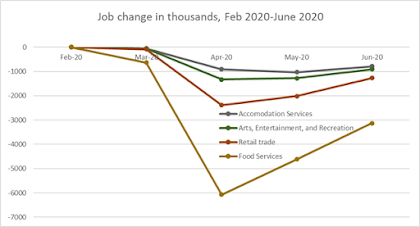 As you can see, those service/leisure jobs still had yet to regain hundreds of thousands if not millions of the jobs that were lost in March and April. And now they're likely to lose again for July's survey as several states are re-limiting capacity and/or shutting down bars and restaurants in reaction to new COVID-19 spikes.

By comparison, the asset-trading sectors of finance and real estate have mostly continued with little disruption.

And that's a very small loss for those sectors, while the leisure and hospitality sectors are still down somewhere between 25 and 38% compared to February. 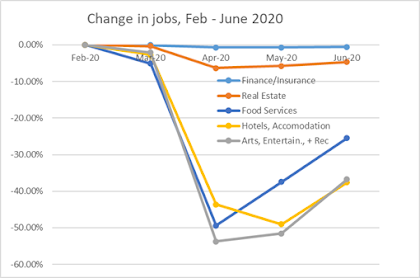 This also reflects in the unemployment rates for the workers in these industries. The finance sector is less than 1/2 the national rate, while other areas are more than double the rest of the country.

But guess who gets a major bailout from the Federal Reserve that encourages more business with low interest rates for something that (in the great words of Gordon Gekko in Wall Street) "creates nothing"? By comparison, more than 1 in 4 of the lower-wage workers in leisure and hospitality were still out of work in mid-June, and they're the ones facing a massive reduction in their unemployment benefits in 3 weeks, along with the looming end of moratoriums on certain loan payments and evictions.

Along those lines, take a look at what Wisconsin Republicans felt was worthy of calling a meeting to end their multi-month paid vacation for.


Reminder that Republicans in the State Legislature called a last minute meeting last week not to ban evictions during a pandemic, but to mandate that tenants pay late fees. https://t.co/FgrE92HWyo https://t.co/YRKjByrONT


Seems backwards, doesn't it? Especially when restaurants, bars, and entertainment venues add a lot more to our everyday lives than most financial services. No wonder why many British musicians (and American allies) are demanding their government give the industry and its related clubs and arenas a bailout because of the inability to put on live shows.

We call for this government to take immediate action regarding the potentially catastrophic circumstances that many independent venues and theatres could find themselves in if funding is not allotted now. #LetTheMusicPlay pic.twitter.com/Vyx7Ay2yHT


These inequities in jobs and government-assisted resources need to be fixed in the next month, or else leisure and hospitality is going to be joined by several other sectors in having millions of missing jobs, as a major source of income in 2020 dries up with no real jobs to replace it.
Posted by Jake formerly of the LP at 2:38:00 PM