That econ. growth report isn't saying what Walker wants it to say

Sometimes it's frustrating to be working during the day when news breaks and someone blatantly deceives on what happened. Today was one of those days when I read Scott Walker trying to take credit for the Philly Fed report which showed that Wisconsin was projected to grow in the next 6 months. Check out this bilge.

The Philadelphia Federal Reserve Bank released a new economic growth forecast for states yesterday. The report forecasts Wisconsin to grow 1.95 percent over the next six months. It is the best economic forecast for the state since 2003. Wisconsin also experienced the most improved forecast in the nation. Wisconsin’s three-month change was 2.36 percentage points, moving to a forecast of solid gains.

Governor Scott Walker today released the following statement on the Federal Reserve Bank of Philadelphia’s forecast of solid growth in Wisconsin over the next six months:

“Strong signals suggest we are turning things around for Wisconsin’s economy, and the Federal Reserve Bank of Philadelphia’s newest report of state leading economic indexes provides yet one more indication that our pro-jobs policies are moving us in the right direction. Although there is much work left to be done, the forecast along with additional economic indicators such as our state’s lowest unemployment rate since 2008 indicate we are heading in the right direction.”

Well, at least Walker got the numbers right. Too bad that's all he got right on that report. Sure, Wisconsin is projected to grow in the next 6 months, BUT SO IS EVERY OTHER STATE. 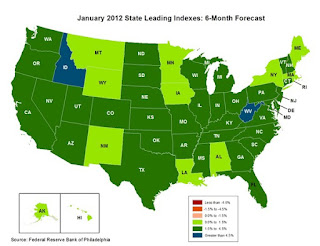 And Wisconsin's growth is nothing too special. It barely qualified for the dark green shade at 1.95%, and trails the rest of the nation, and is well behind most of the Midwest.

So credit Obama for the Wisconsin economy coming back, not Walker. This is especially true when you look at where we've been the last several months. Another big part of the Philly Fed survey is going over the last 3 months of economic performance. And as shown in prior months, Wisconsin remains a standout for the wrong reasons. 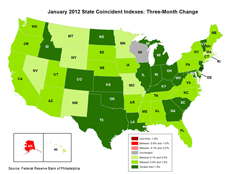 And that's far from all, as Wisconsin had its economy contract for all of 2011 (i.e. in RECESSION and worse off than when Walker took office) while every one of the other Midwestern states bounced back. Going back to the start of the U.S. recession at the beginning of 2008, you'll see that Wisconsin was beating both the U.S. and most of its neighbors in economic performance under Jim Doyle. Then Walker came along and Wisconsin got passed by the U.S. and Indiana in 2011, with Ohio poised to do the same in the first half of the year. Coming up quickly on the stagnant Wisconsin is...Illinois. (click on picture for bigger view)

But Walker is hoping that you'll be as shallow as the average Milwaukee talk show listener and not notice the context that the next 6 months' growth is from a much lower point than it should be, and that it would be merely an effect of the U.S. economy continuing to gain strength under President Obama. Certainly Walker's backers at the Journal-Sentinel are willing to play stupid, giving prominence to Walker's side of the story on the projected growth while burying the fact that the U.S. and most other states are slated to grow faster.

And because you know the corporate mouthpieces at Journal Communications and the Wisconsin State Journal won't tell that truth, it's up to people like me to break these stats down and write about it. It's up to readers like you to call out this bullshit and continue to expose the economic failure that is the Scott Walker Administration to your friends and the public. We'll win if the truth gets out, we just have to do it.
Posted by Jake formerly of the LP at 5:27:00 PM