I've been tempted to ignore blogger Jeff Simpson's increasingly screeching screeds in favor of Kathleen Falk over the last few weeks. While I'm voting for and supporting Tom Barrett on Tuesday (yes, this is the official Jake endorsement, I ENDORSE BARRETT. I'm sure this shocks you), I believe the overall goal of ending the age of Fitzwalkerstan and knocking out Scott Walker is the one to concentrate, and I will strongly back whoever wins on Tuesday. Plus, I think Falk has the competence to be up to the job and could step in and do reasonably well (which would be a world of improvement over what we have now). She's not my choice in the primary, but I'd certainly welcome her as my governor.

However, Jeff posted a pile of crap yesterday that could not be ignored. He was trying to insist that because Falk's loss to J.B. Van Hollen in the 2006 Attorney General's race was closer than Barrett's loss to Scott Walker in the 2010 Gubernatorial race, that this means that Falk is the more electable statewide candidate. This simply isn't true, and I will show you why.

First, each election year is different, and each election in each year does not happen in a vacuum. 2006 was a major Dem year, both in Wisconsin and nationwide. Dems won back both houses of Congress after years of Bush malfeasance in Iraq and at home were too big to ignore. In Wisconsin, the GOP Legislature had pushed through a large amount of divisive issues in a cynical attempt to drive up their turnout at the polls, including a horrible anti-gay marriage amendment. This backfired greatly, and drove up Dem turnout in a number of places as a result in Wisconsin, especially around college towns, and Dems won back the State Senate and took 8 seats in the Assembly.

However, Kathleen Falk still ended up losing the A-G race to Van Hollen, despite these huge tailwinds. In the process, she massively underperformed the Dem in the top statewide race, which was Jim Doyle vs. Mark Green for Governor, and she also was way behind Secretary of State (and 2012 primary opponent) Doug La Follette.

So Falk underperformed Jim Doyle by 7.81%, and Doug La Follette by a whopping 19.09% in 2006. In fact, if Falk did as well as Doyle in the City of Milwaukee, she would have beaten Van Hollen , as she underperformed Doyle by nearly 10,000 votes there.

Now let's compare this to Barrett's allegedly weak performance in the GOP year of 2010. After a year of right-wing Tea Party propaganda being built up by media looking for some kind of "both sides" narrative after the Dems' sweeping victories in both the U.S. and in Wisconsin (where Dems took over both houses of the Legislature), the set-up was there for a GOP bounce-back. Combined with a low voter turnout that favored the people that vote GOP (more on this in a second), and the GOP took advantage of the opportunity in both the U.S. and in Wisconsin. The GOP took over the House of Representatives, won several Senate seats back, took both houses of the Wisconsin Legislature, Scott Walker was elected governor and Ron Johnson took Russ Feingold's Senate seat.

So let's take a look at how Barrett did in comparison to Russ in 2010, and also compare him with the only Dem to win a big statewide race- Doug La Follette.

So that's a 7% extra level of underperformance for Falk at the top-line, and a more than 10% extra level when compared to La Follette. I think it's pretty clear who is less likely to resonate as an individual on a statewide level, and that's Kathleen Falk.

Lastly, Jeff brings up a point by mentioning who will be more likely to vote in 2012 vs. 2006 and 2010, and uses the 2011 Supreme Court race of JoAnne Kloppenburg and David Prosser as an example. 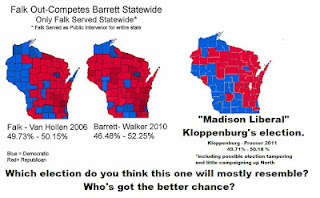 But of course, he gets the point behind those numbers DEAD WRONG. Check out who voted in those elections. You'll see this slanted heavily against Barrett in 2010, and a 2006 type of turnout may have made the race vs. Walker very close indeed. Tom is more likely to keep the base that he had in 2010, run up vote totals in counties he won, and flip some counties that he might have lost in 2010. Given that the total vote in 2006 and 2010 were within 1,000 of each other, the total numbers will correspond.

The two most pro-GOP counties in the state in Waukesha and Washington Counties made a significantly higher percentage of the vote in 2010 than 2006, which certainly hurt Dems in 2010 vs. 2006. But in a 2010 bright spot, the City of Milwaukee also grew in significance, showing that Barrett could get voters out in his hometown to vote for him. (the City of Milwaukee went 74-25 for Barrett in 2010 vs. 71-27 for Doyle and 69-31 for Falk). With Dane County being the recall hotbed that it is, you don't think they won't get even more turnout than they got in the 2010 elections when many Dane County residents had little idea just how bad Scott Walker was? You bet we'll be there.

Bottom line- all Dems did significantly worse in 2010 than they did in 2006 due to issues floating about and the increased number of GOP voters that showed up to the polls. The fluky nature of that 2010 election goes a long way toward explaining why Walker and WisGOP have acted as drastically as they did, because they know deep down that 2010 was a one-time deal that they lucked out on.

And the 2010 vs. 2006 data show that the candidate who was unfortunate enough to be caught up in that wave is the candidate who is most likely to win those votes back when Wisconsinites go to the polls on June 5. His name is Tom Barrett.