Yep, same routine we've seen in the last several years from those guys. 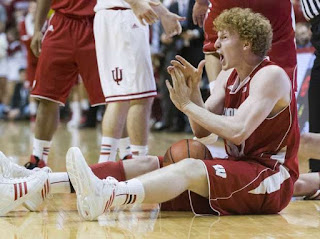 In addition to the fact that it's an upset on the home floor of the Number 2 team in the nation, and that it puts Bucky all alone in first place in the best conference in America, beating IU has extra relevance to me, as I explained back here in 2008.

And oh yeah, Bucky hasn't lost to the Hoosiers since I wrote that 5 years ago. It also extends Bo Ryan's record vs. Tom Crean to 15-2, and if you check Marquette vs. UW history, it shows that Buzz Williams has more career wins over Bo than Tan Tommy does.

But then again, TAN TOMMY IS JUST LIKE SCOTT WALKER, a fraud who talks a big game, but delivers a small one. Even though both got a reprieve from losing their jobs in 2012, and the media is still fooled into thinking these guys are on the way up, people with a clue know better, and both will be crashing to earth soon enough.

Oh, and both are constantly abused and exposed by them crazy libruls from Madtown. Both beatings will continue until both Tan Tommy and Gov. Dropout are inevitably removed from power.
Posted by Jake formerly of the LP at 12:23:00 PM