This week in WisGOP idiocy- unparalelled?

I understand that there's a certain baseline of Wisconsin Republican foolishness. Sometimes it's worthy of a minor laugh or annoyance, but often it's only at the beningn level. But this week was truly a special one, as not 1, not 2, but 3 Wisconsin Republican toolboxes found a way to make our great state look like a bunch of backwards, myopic fuckheads that belong in the Confederacy instead of the Upper Midwest.

1. Let's start at the top, with Governor Scott Walker. His miserable jobs record and long-term debt isn't good enough anymore, oh no. This time, Gov. Dropout repeated his common mistake of running smack when he really has no right to (a good example of which is here).

This time, it was in trying to ridicule the budget of our neighbors to the west, as Walker ripped on  Minnesota Governor Mark Dayton's plan to raise income taxes on the rich and in restructuring the Minnesota tax code on sales taxes and other items. Well, Minnesota Public Radio took a look at our two states, and it pretty much shows Minnesota has kicked our economic ass since Walker and Dayton both took office in 2011. Here's but one of those charts, which shows Minnesota has continued to gain jobs since 2011, while Wisconsin has treaded water at best over the last 2 years. 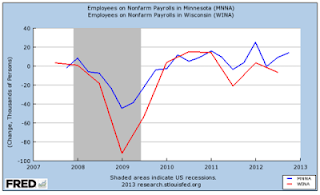 Look at that cross in early 2011 between the red (Wisconsin) and blue (Minnesota) lines. Right around the time of Act 10, and no it's not a coincidence. Oh, and need I mention that Minnesota has now passed us for total jobs, despite having 384,000 fewer people than Wisconsin only 2 years ago? Any leader who gave a fuck about results might look at why we're getting passed and learn something, but not Scotty. No sir. He's got that Dubya-style "cocksuredness in the face of absolute failure" down pat.

2. Speaking of cocksure bigmouths, how about the week Paul Ryan had? First, he gets ridiculed by Jon Stewart for his typical ass-clownery- this time about his whole "makers vs. takers" bullshit.

Of course, Ryan's act is doubly rich when it comes from a guy like Purty Mouth Paulie who's never had a real job outside of D.C.

But that didn't stop Ryan. Oh hell no. He then showed up at some D.C. event where he promptly got humiliated by Ezra Klein and others in the Washington press corp who have finally decided this guy's 15 minutes are now up. Here's a typical passage.


“What is the evidence,” [Klein] asked, “be it historical or academic, underneath the idea that bringing another $600 billion or $700 billion out of tax expenditures — which some Republicans, like Alan Greenspan, think is properly classified as spending anyway — what is the evidence that makes you convinced that would have such a deleterious effect on the economy that it wouldn’t be worth taking it to get the debt deal?”

“I think rates matter,” Ryan replied. “I think the statutory rate matters at the end of the day.”

“But you could have the same or lower rate there,” [Klein] said. After all, if you’re closing loopholes, the top marginal tax rate doesn’t change.

“I don’t know about that,” said Ryan. “Remember, we have to write these things statically. We don’t use macroeconomic feedback on the Joint Tax Committee.”

“But if you capped deductions at $15,000,” I pressed, “that wouldn’t change rates.” (to anyone with a clue about taxes, you know these are 2 different things)

Ryan didn’t budge. “You have to decide where you want to cap deduction or which deductions stay or go, what will pass, and what the resulting rates will be. The other problem I’ve noticed — and this is just experience from my 15 years in Congress — every time you give a little revenue, it just goes to spending. The spending cuts are always later and the revenue gets pocketed. It’s one of those fool me once, shame on you, fool me twice, shame on me.”

He's avoiding the point and talking out of his ass. As a former high school teacher, you can spot someone trying to spew bullshit with terms and jargon while not having a clue what they're saying, and Pau-LIE defines it throughout this Klein article. What a fool.

3. But he isn't the biggest embarrassment from Wisconsin on Capitol Hill this week. Oh no, that clearly goes to Senator Ron Johnson, who earned his nickname of (mo)Ron this week in spectacular fashion.

Part 1 involves an amateur like Johnson being eviscerated by a true pro- Secretary of State Hillary Clinton, who exposed (mo)Ron as the inherited-wealth loudmouth no-talent that he is.

The Chief has more on just how ignorant (mo)Ron was in this exchange. It's truly staggering that this guy would ignore answers that he was already given in order to give Faux News talking points.

But (mo)Ron wasn't done for the week! He followed up that humiliation with another, where Clinton's probable successor, Senator John Kerry, showed Johnson was totally talking out of his clueless ass, revealing that Johnson ditched a meeting where he could have actually learned something about Benghazi (the good stuff starts around 1:26 here- "Were you at the briefing with the tapes?" (mo)Ron- "No.").

No, you don't know what happened in Benghazi you (mo)Ron, because YOU PASSED UP THE CHANCE TO SEE THE TAPES. As I said to others this week, Kerry had to be thinking "Dear God, Wisconsinites chose this ignorant fuckup over Russ Feingold? Are you kidding?"

So that's 3 pretty good candidates for "political Wisconsin embarrassment of the week." I'm even going to be charitable and leave out David (Get Yer Guns!) Clarke, as he's a small time loser, and not on the level of Gov. Dropout, Purty Mouth Pau-LIE or (mo)Ron. My choice in this category is for Johnson, for catapulting from nationwide obscurity to Allen West/ Michelle Bachmann levels of "Who could have voted for this dipshit?" But you are more than welcome to state your case in the comments.

All I know is that I'm tired of having to apologize for having these guys represent my state. NO  MORE.
Posted by Jake formerly of the LP at 8:04:00 PM