A good June jobs report makes it a mediocre quarter

The Wisconsin DWD reported a strong June jobs report, with 17,500 jobs gained on a seasonally-adjusted basis for the month and 13,800 in the private sector. And despite my opinions about Scott Walker's policies, there's no doubting that these are pretty good numbers, most notably in manufacturing, where the state gained 1,500 jobs while the nation was losing 6,000 in the same sector (so for all the BS about a "skills gap", someone was hiring Wisconsinites in these positions).

Outside of the manufacturing boost, a lot of the hiring was similar to the nation's not-as-good-as-it-seemed report for June, with lots of jobs in the seasonal, low-wage "Leisure and Hospitality" and "Trade" sectors (9,700 of the 13,800 private sector jobs added were in these two sectors). We'll have to see if these jobs hold on through September or October, or if we'll have higher-than-normal seasonal layoffs to match the higher-than-normal seasonal hiring in these areas. But for the time being, let's take it as a good economic sign.

The strong June digs Wisconsin out of the hole it fell into with the horrible March and April jobs reports, which tells me that some of the delayed hiring due to the bad Spring weather has been unwound over the last two months. As a result, the state is back on a positive jobs track, but the Walker jobs gap is still in the neighborhood of 50,000 jobs. 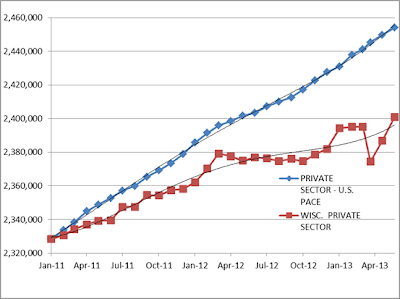 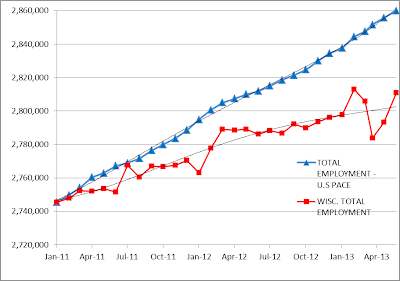 I also have a third chart which illustrates that even with the good numbers in May and June, April was so awful that it still was the slowest quarter for Wisconsin private-sector hiring since Q3 2012, and 4 of the last 5 quarters have averaged less than 2,000 jobs a month. Also worth noting is that the best 3 quarters for hiring in the Age of Fitzwalkerstan were BEFORE Walker was retained in the recall elections during June 2012 - so keep it in mind the next time Scotty tries to pull the "uncertainty" excuse (which no doubt will come up again). 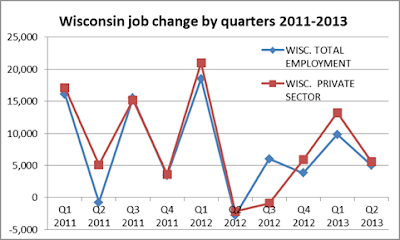 So while it's a good sign that more jobs were added in Wisconsin as the temperatures heated up in June, let's wait until football starts kicking off before we even consider that we're pulling ourselves out of the massive hole we were in before the last two months.

EDIT-Here's a related post by the Institute for Wisconsin Future's Jack Norman, titled "Wisconsin sees a surge in bad jobs," and it features the following statistic.

The bad news: Most of the growth—7,200 jobs—was in the “leisure and hospitality”
sector, where average weekly pay was only $284 last year. That’s barely one-third the
overall average wage in Wisconsin of $803.