Sometimes they make it too easy

Was cruising around the Internets today, and caught this nugget from the Governor's Office, which of course, the Walker-endorsing Journal-Sentinel ran with like the mindless stenographers that they are.

Madison— Wisconsin jumped to 20th in the nation this month, according to the Federal Reserve Bank of Philadelphia’s leading index.

And yeah, I'd looked at the report earlier in the day, and I wouldn't be bragging if I was the Walker boys if I was them. That great outlook they're trying to prop up says that Wisconsin is projected to have its economy grow a tepid 1.11% the next 6 months, which puts it below the rate of U.S. growth for the same time period, and middle of the pack for the Midwest. And even when you include this sunnier outlook, Wisconsin would still be well below all of its Midwestern neighbors in the Age of Fitzwalkerstan, 12 months away from the 2014 elections. (I'll link to the actual report once its website is back and running). 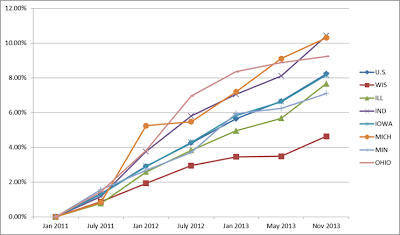 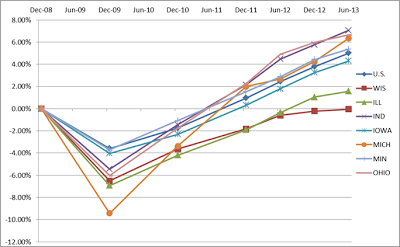 The context-free blatant cynicism of the Walker Admin taking the time to do a press release on one barely favorable outlook tells me 2 things.

1. They really do think the media and their supporters are so stupid that they'll accept these things at face value without looking into them (given the record of the last 3 years, that's a good bet).

2. They're really desperate for any good economic news, which tells me that the reality of Walker's failures is getting through to the public, and taking its toll in the polls. They're leaking oil, they know it, and they're just hoping to sneak that fact by the clueless bystanders the next election. Then they can let the state REALLY go to hell with their deficit laden budget and lack of options to fix it.

Which is why people like me have to keep writing things like this, so they're not allowed to get away with their failures. And despite the Walker boys' spin, they're still failing big-time.
Posted by Jake formerly of the LP at 8:16:00 PM