Recession or expansion? Both for U.S. and Wisconsin

This week featured a number of economic reports that I wanted to touch upon. First was the surprising downward revision in Q1 2014 GDP that said the economy shrank at an annual pace of 1.0% in the first three months of this year. That's quite a turnaround from the 0.1% gain that was first reported, but the Bureau of Economic Analysis adds that the change is due to two "backroom" figures in particular.

In fact, reducing inventories subtracted 1.62 percentage points off of 1st Quarter GDP, meaning that final sales were actually up 0.62%. That's still not great, and this chart shows we've been on a downward trend the last two quarters, but it also doesn't indicate recession to be imminent. 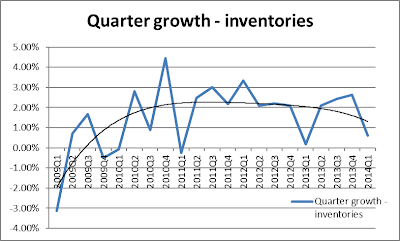 And the year-over-year growth in GDP still remains decent, at just over 2.0%, due to good growth in the 2nd and 3rd Quarters of 2013. If growth bounces back in the Spring and Summer(as most experts have been saying it will), then we'll be in the same slow-but-steady expansion that we've generally been in for the last 4 1/2 years. 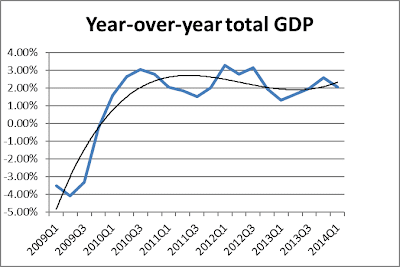 And job growth remains decent, as 288,000 jobs were estimated to have been added in April, and U.S. unemployment claims have continued to drop in May, down to the lowest seasonal-adjusted amounts in nearly 7 years. Wisconsin's claims have fallen in tandem with this, with a year-over-year drop around the 10% amounts we've been seeing nationwide. 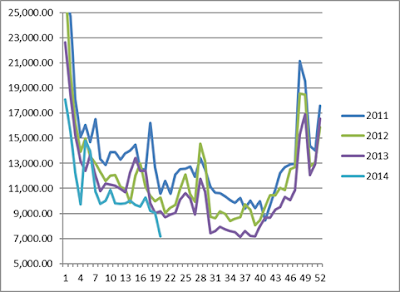 The last week noted had the lowest new unemployment claim amounts in Wisconsin in several years, but you gotta think some of that is related to the fire that broke out in the building that houses the Wisconsin Department of Workforce Development, and that like workers' comp claims, some unemployment claims weren't processed.

Another indicator we received in the last week was the Federal Reserve Bank of Philadelphia's 50-state survey of the economy. You may recall that this index was being touted by Gov Walker and other WisGOP flacks when the numbers predicted strong economic growth last Summer and Fall. Well, we haven't heard that line from this group in recent months, and there's a good reason why. Because the "rocketing" growth didn't quite happen in Wisconsin, and it hasn't dug the state out of the last-place hole that it's been in since the Fitzwalkerstani policies began in January 2011. 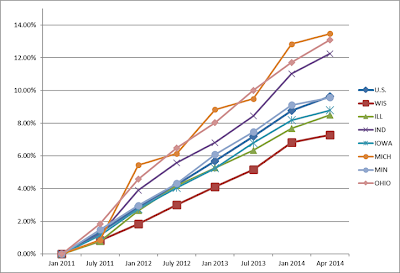 And just this Thursday, the Philly Fed released its leading index, predicting economic growth over the next 6 months. This doesn't look as good either, as Wisconsin's economy is predicted to grow at a mediocre 0.92%, which would be just over half the national rate. What this means is that Wisconsin would remain a clear laggard to the rest of the Midwest as the nation as a whole throughout Scott Walker's full term in office, and that might be on the mind of Wisconsinites as they go to the polls in November. 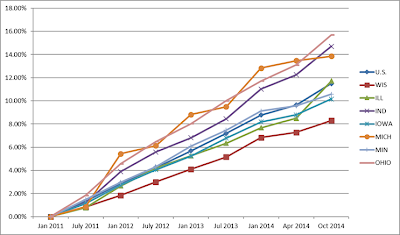 So one of the biggest cheerleaders for a rebound in U.S. economic growth for Q2 and Q3 has to be Scott Walker and the Wisconsin GOP, as decent U.S. growth has been the only reason the state has stayed out of recession and has gained the modest amount of jobs that it has (and even then, it's not even halfway to Walker's goal of 250,000). And with tax revenues on track to fall short by more than $200 million, which will lead to higher deficits in the next budget, Wisconsin certainly can't afford the country not to rebound from that 1.0% decline in GDP that it had through the polar vortex winter.
Posted by Jake formerly of the LP at 10:49:00 AM