Thoughts on the troops for Memorial Day

On this Memorial Day weekend, we should not only remembered who has fallen in service to this country, but we should also remember the living. The mistreatment and underfunding of our troops over the last 13 years is a national disgrace, and should be kept in mind when you see certain people waving the flag this weekend.

With that in mind, let me give you three notes

First, here's two segments of Jon Stewart on his last show before the holiday weekend. Part 1 talks about how Senate Republicans (and only Senate Republicans) played partisan games that underfunded veterans' benefits and services, which has now led to the sickening situation that exists today.

But it's not only in the 21st Century that this has happened in. Stewart reminds us that not giving back to the vets has been an American tradition since our founding. The not-funny speech Jon gives at the end is especially poignant.


The Daily Show
Get More: Daily Show Full Episodes,Indecision Political Humor,The Daily Show on Facebook
Back in the 21st Century, some of our own Congress members in Wisconsin have kept with this tradition of talking a big game about "supporting our troops", but not putting the money where their mouths are. Capper at Cognitive Dissidence takes apart Rep. Sean Duffy, Sen. Ron Johnson, and their fellow TeaBaggers for deciding that opposing President Obama is more important to them than all other priorities. Here's a small list of some of the bills these people have voted against.


H.R. 466 – Wounded Veteran Job Security Act (became H. R. 2875). This bill would actually provide job security for veterans who are receiving medical treatment for injuries suffered while fighting in defense of their country. It would prohibit employers from terminating employees who miss work while receiving treatment for a service-related disability.

H.R. 1168 -- Veterans Retraining Act – This bill would provide for assistance to help veterans who are currently unemployed with their expenses while retraining for the current job market.

H.R. 1171 – Homeless Veterans Reintegration Program Reauthorization – This bill would reauthorize programs in support of homeless veterans, to assist them with job training, counseling, and placement services through the Department of Veterans Affairs through 2014.

H.R. 1172 -- Requiring List on VA Website of Organizations Providing Scholarships for Veterans which does nothing more than direct the Department of Veterans Affairs to include information about scholarships for veterans.

H.R. 1293 -- Disabled Veterans Home Improvement and Structural Alteration Grant Increase Act of 2009 – Here’s another bill in support of those who have fought for their country, passed by House Democrats and blocked from becoming law by Republicans. This would increase the amount paid by the VA to disabled veterans for necessary home structural improvements from $4,100 to $6,800 for those who are more than 50% disabled, and from $1,200 to $2,000 who are less than 50%, disabled. This means, if a veteran lost the use of his legs in service of his country, the country will pay for the wheelchair ramp so that he can live at home. By the way, the last time this ceiling was lifted was in 1992. There isn't even a fiscal reason for being against this bill, as the total cost of this bill, according to CBO estimates, would be a “whopping” $20 million. That's about a quarter (25 cents) per family of four.

H.R. 1803 -- Veterans Business Center Act – This bill would set up a Veterans Business Center program within the Small Business Administration, which would specialize in such programs as grants for service-disabled veterans, help them develop business plans and secure business opportunities. In other words, folks, it would create jobs and offer opportunities those who have fought in defense of our country.

Oh, but they do wear their flag pins, while us who oppose putting the troops in unnecessary danger are the ones who "don't believe in America" and want the country to fail. Riiiiiight. So much for a country that believes in pay any price, bear any burden, meet any hardship, support every friend." (Spoken by a veteran, by the way)

With that in mind, I'll end with this quote from one of the few good people in the U.S. Senate reminding us that the effects of going to war linger long after the last shots are fired. 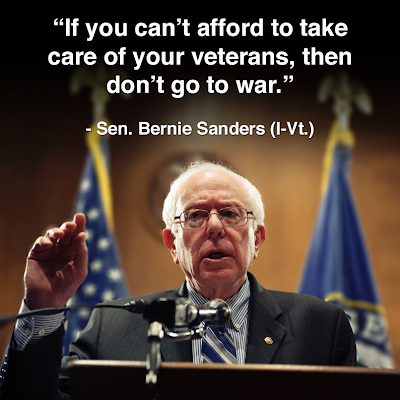 Let's remember the troops and their well-being after Memorial Day, and vote accordingly, shall we?
Posted by Jake formerly of the LP at 1:26:00 PM