I figured the release of the monthly jobs report in Wisconsin would be a big deal today, given the benchmarking of 2014's numbers along with past years. And boy was I right. Take a look at Page 3 of the Wisconsin Department of Workforce Development's release from this afternoon, which was conveniently dumped out as the (right-to) work-for-less debate lifted off in the State Assembly.

You're reading that correctly, the total amount of jobs in Wisconsin were knocked down by more than 30,000! I knew there were big differences, but this was quite a bit more than I was expecting. Needless to say, the Scott Walker's DWD chose not to emphasize this fact in their propaganda analysis.

The unemployment rate drop is nice, but likely reflects growth of Wisconsinites taking jobs outside of the state's borders, and working in places such as the Twin Cities and Chicago (which would be a reason why the household and workplace surveys have been out of whack for the last few years). And of course, that alleged private sector job growth of 139,000 is a whole lot less than the 250,000 Scott Walker promised in his first four years in office, and also is quite a bit less than the 160,000-170,000 that was being listed after the December 2014 report.

It also is well below the national rate of growth during the Obama jobs recovery. Remember that the US numbers were benchmarked last month, but they were revised higher, which means the Walker jobs gap is as high as ever. I've updated the chart using the DWD's info on December and January year-over-year job growth, but haven't updated every month, which will show you the effect of these downward revisions, especially in December 2014 (in red on the right side of these charts). 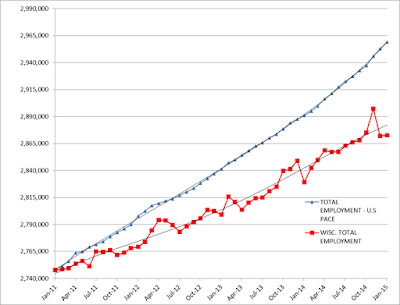 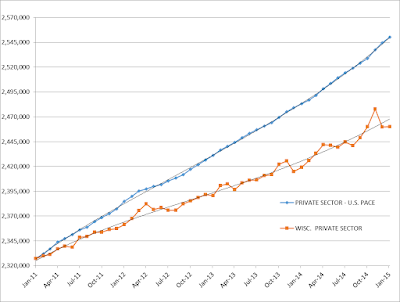 I'll update this a bit tomorrow, but at first glance, this makes the Walker jobs gap stand at 90,000 private sector jobs. U.S. job growth was at a rate approximately 60% higher than Wisconsin's over Scott Walker's 4 years. Combine that with the exploding budget deficit, and who is this guy to talk about his economic record? What a total failure!

Of course, part of the reason Walker was retained was his administration's abilities in hiding this bad record, and another part was the state's largest newspaper helping him along by not informing the public of the full story. And today was no exception. Check out these leading paragraphs from the Milwaukee Journal-Sentinel's John Schmid.

The economic recovery advanced into January as Wisconsin's unemployment rate declined to a preliminary 5%, down from 5.2% in December and 6% in January 2014.

Thursday's monthly estimates from the state Department of Workforce Development show the state's unemployment rate hovering at the best levels since August 2008, about a month before the financial market meltdown in that year triggered a brutal global downturn. In the worst months of the last recession, the state jobless rate peaked at 9.2% in 2009 and 2010.

The state appears to be tracking the national recovery, now in its fifth year. On Thursday, the state agency said Wisconsin gained 44,900 private-sector jobs from December 2013 to December 2014 — the highest 12-month December-to-December increase since 1999. That parallels the national trend in the same 12-month period, when U.S. employers capped the best year for job growth since the tech-boom year of 1999.

Nowhere in the article does Schmid mention the huge downward revisions, or the fact that Wisconsin's numbers still greatly lag the US's growth rate. That would seem to be the bigger story than repeating the Walker Administration's happy talk.

Here's my question- is Schmid stupid, gutless, or under orders not to the real story to J-S readers (most of whom don't have a clue about the DWD report or have any frame of reference for comparison)? Whatever the reason, articles like that from the J-S's staff Walker stenographers go a long way toward explaining why I don't give that newspaper a dime, and you shouldn't either.
Posted by Jake formerly of the LP at 8:39:00 PM