Here is more interesting reporting from the Wisconsin Budget Project site, who crunched the numbers and showed that despite what WMC and GOP propaganda try to tell you, Wisconsin is pretty much middle-of-the-road when it comes to taxing and spending.

Some policymakers focus on Wisconsin’s ranking on taxes alone when evaluating its revenue compared to other states. But focusing just on taxes means that fees and other charges, which come from residents’ pockets much like taxes do, are not taken into account. Combining taxes with fees and other revenue gives a broader and more complete measure of the money that state and local governments in Wisconsin collect from their residents. 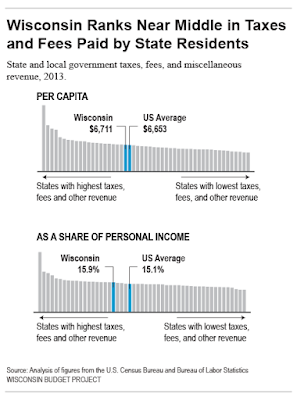 This explains how Wisconsin is 11th in the country when it comes to total taxes paid as a percentage of income, but falls to 19th when fees and other revenues are added to the equation (i.e.- “real life payments”). We make up for relatively high state taxes with the reality that local governments levy few taxes other than the property tax (a 0.5% county sales tax is about it), and that non-tax fees are often lower than other places (such as our $75 vehicle registration fee, a number that was a welcome relief to friends of ours who moved from California three years ago).

Another reason Wisconsin rates so high for state and local taxes is that the state is in the bottom third of both federal revenue and federal spending, which drops Wisconsin down to 26th in the nation for per capita revenue and 25th in per capita spending when the federal payments are mixed in. In addition, this means state and local payments have to make up the difference in order to maintain the same levels of service of states that get more cheese from D.C.

The Budget Project also notes that Wisconsin may have deserved a high-tax reputation 15 years ago (during the Booming Clinton/Thompson years), the state has generally fallen down that list since 2000, as evidenced by the following statistics.

Revenues and spending as % of income, Wisconsin
Revenues including federal aid
2000 18th
2013 25th

And yet, while Wisconsin was generally a leader for Midwestern job growth and quality of life at the start of the 2000s (the state gained over 190,000 jobs between the end of 1996 and the end of 1999), it is now a laggard in both categories today, despite being allegedly “better for business” by lowering its ranking in total taxes and spending. Is it possible that the WMC/GOP mentality of "low taxes, low regulations, low wages" just doesn’t work? Reality and math sure seem to indicate that.