A timely and great analysis from the Wisconsin Budget Project on the continually increasing cost of imprisoning people in Wisconsin, and how it's taking away from other needs and priorities.

First of all, Tamarine Cornelius points out that Wisconsin spends more per capita than the national average, and over all of our neighbors. 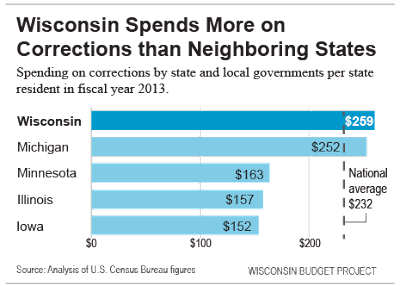 The increased costs and rates of incarceration means that the newest state budget will spend more money on Corrections, while reducing funds from education. 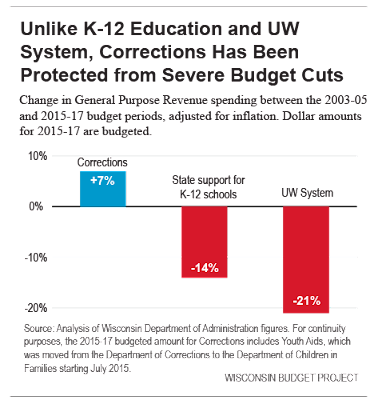 So what are GOP state legislators doing in reflection of this increased spending on prisons and increased strain on budgets? Trying to increase the costs and barriers that result from such "tough on crime" policies against the poor, which increases the spiral eve\n more.

Rep. Joe Sanfelippo, of New Berlin, began circulating the bill for co-sponsors on Tuesday. He said in a memo to his fellow lawmakers that the bill would help stop drunken drivers who have lost their licenses from getting behind the wheel.

Currently, a judge can impound a car as part of the punishment for driving without a valid license if the driver owns the car. The length of the impoundment is up to the judge....

Under the bill, a police officer would be required to immediately impound the vehicles of those caught driving without a valid license. The officer would have to contact any rental or leasing agency registered as the car's owner, as well as any lienholders. Police wouldn't have to impound the vehicle if the driver's license expired in the six months before he or she was stopped and the driver hasn't been charged with operating without a license in the past.

If the vehicle isn't claimed within 30 days of the end of the impoundment period it could be sold.

San Felippo is trying to claim the bill is related to dealing with drunk drivers, but one look at who would be likely to be subjected to these impundments shows a very different reality. In fact, San Felippo's bill is a racist ploy that disproportionately hurts minorities in Milwaukee. Here is a 2005 study from UW-Milwaukee’s John Pawasarat which was done regarding a proposed voter ID law at the time, and it shows just how commonly minorities get their licenses revoked in and around the state’s largest city.

In fact, Wisconsin Community Services and Wisconsin Legal Action have run a program for several years to help low-income Milwaukeeans get their driver’s licenses restored in order to improve their employability. But instead of encouraging measures like that, or in changing criminal laws that lead to licenses being taken away for violations that have nothing to do with driving, Rep. San Felippo thinks it’s a better idea to put up MORE barriers to that group of people. This will likely put those individuals under further hardship, making it more likely that hopelessness and/or criminality become part of those people’s lives.

Then again, why spend taxpayer dollars on something that might improve outcomes without the need for jail time when you can give those funds to the corrections system instead? Or take it to the next level, and give those correctional services off to a campaign contributor that may profit from it? Both Gov Walker and ALEC (who the majority of WisGOP legislators belong to and who is often responsible for many of these hateful, regressive bills) have longtime connections to the private prison industry, with Walker attempting to privatize the prisons nearly 20 years ago. In order for privatizing prisons to be seen as a viable option, what needs to happen is for the facilities to be overcrowded, with taxpayer-funded resources not being able to keep up to the needs. Regressive laws like San Felippo’s keep impoverished people in the corrections system, and decreases the chances for them to get out of it, so there’s the supply of prisoners needed for potential overcrowding.

Then combine it with the disgraceful understaffing and lack of pay for jobs that have become a huge burden onto the state’s prison system, with the latest change being the setup of a rotation system for the forced overtime at the prisons, which includes veteran guards and other higher-ups along with newcomers. This is done without input from the guards themselves in the Post-Act 10 world, and is being chosen instead of raising pay of correctional guards and attracting more talent. The new OT policy is likely to drive up costs further, while continuing to drive down morale, making the Prison System (and the state’s budget) even less sustainable, and making privatization more likely. Very sick, but that’s how these people roll.

And San Felippo’s vehicle impoundment law also fits another WisGOP goal. After all, it seems to be a requirement for elected officials in the party to go out of their way to punish poor people, and that’s doubly true if those poor people can be sterotyped as “minorities in Milwaukee.” Let’s face it, if the state invested in intensive programs to prevent poverty, and they worked to reduce crime and improve outcomes for the poor in the state’s largest cities, then it proves the whole WisGOP “blame the poor” mentality to be wrong, and that government works in solving these problems. And that isn’t an acceptable outcome to them.

In addition, having a permanent underclass of citizens allows for a group that working-class whites can resent and “kick down” at, allowing the GOP to stay in power, which continues the cycle of working-class whites seeing their wages stagnate and/or drop, while the oligarchs skim increasing profits off their hard work. Since the GOP runs all forms of state government in the state, and has numerous AM radio stations willing to hammer this propaganda, why shouldn’t they keep tapping that the well of working-class white resentment?

Put these details together, and it makes for an ugly picture of Wisconsin politics in GOP-land. While some might see the increased cost of Corrections in Wisconsin as having little to do with a seemingly innocuous bill by Joe San Felippo to impound the cars of those charged with illegal driving, I see political actions that have a clear connection to favor a certain outcome. In this case, the continuance of a two-tier Wisconsin society while encouraging those on the lower and middle parts of that second tier to scapegoat those below them, allowing the rich and politically connected to continue to steal from all of the rest of us.
Posted by Jake formerly of the LP at 5:13:00 PM