Been tied up with my own life, but I wanted to forward the latest article in Bruce Thompson's often-strong "Data Wonk" segment in Urban Milwaukee. I encourage you to read the whole thing, as Thompson compares the following 3 tax plans.

3. The tax plan put forth by Speaker of the House Paul Ryan and the House GOP

I'll give you the nice pictures, and you can read Bruce's article for more detail. First of all, when these tax plans were scored by the Tax Foundation and the Tax Policy Center, both institutes agreed that Clinton's would raise additional revenue by taxing the rich more, while both Trump's and Ryan's plans reduce revenues by cutting taxes for everyone, but especially the rich and corporate. 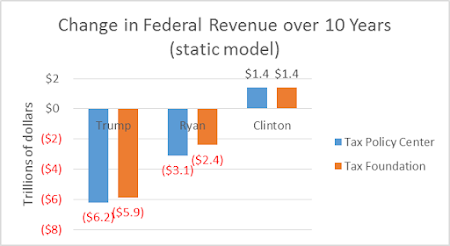 Now, if you're into having government collect less in taxes on principle, you may still prefer either of the GOP's plans, and the lower revenues can also be a good excuse to cut Medicare, Social Security, and other social spending (strangely, these people never seem to bring up military spending as a place to cut). But Thompson mentions that what those Trump or Ryan tax cuts won't do is grow the economy in the long term as much as Clinton's plans. The University of Pennsylvania's Wharton model indicates that while Ryan's or Trump's tax cuts may give a very small bump in economkc activity in the first couple of years, it'll drop activity far below the current trend line in the years after that, and make us worse off than both the status quo and Clinton's plan. 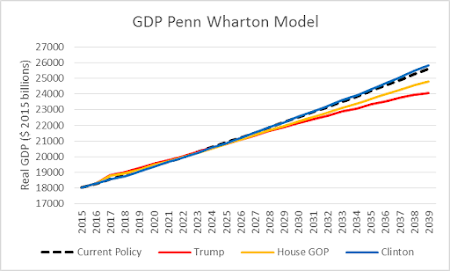 And Thompson concludes by noting that even if you buy into the right-wing magic of "dynamic scoring", where people respond strongly to tax cuts to grow the economy much more than history shows it will, the GOP cuts will still leave revenues depressed, leading to either huge deficits, or major budget cuts, unlike Clinton's plans. 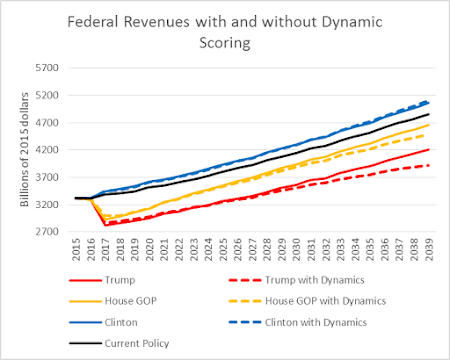 So there you go. Run with that information any way you want over these last 12 days.
Posted by Jake formerly of the LP at 8:25:00 PM