More proof that Wisconsin is the model....of failure

With all of the idiocy and mayhem flying out of DC, some other news flies under the radar. One of these things was Friday’s release of the coincident indexes of economic activity in the states, as compiled by the Federal Reserve Bank of Philadelphia.

To review, these indexes are measured in the following way.

The coincident indexes combine four state-level indicators to summarize current economic conditions in a single statistic. The four state-level variables in each coincident index are nonfarm payroll employment, average hours worked in manufacturing by production workers, the unemployment rate, and wage and salary disbursements deflated by the consumer price index (U.S. city average). The trend for each state’s index is set to the trend of its gross domestic product (GDP), so long-term growth in the state’s index matches long-term growth in its GDP.

Since this most recent report goes to the end of 2016, it seems instructive to give this a look and see where Wisconsin shapes up in it - not only for 2016, but also for the 6 years that Gov Walker and the Wisconsin GOP have been in power. First, let’s see how the state did compared to our Midwestern neighbors, and the US as a whole. 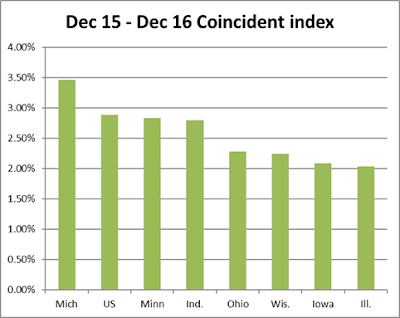 As you can see, for 2016 Wisconsin had the 5th highest increase in the Philly Fed index out of 7 Midwestern states, and our 2.04% growth rate lagged the US rate of 2.88% growth. Not good, but also not disastrous, as it illustrates how the Obama Recovery continued to drag Wisconsin along into a better situation than the year before.

More interesting is how this growth figure changed throughout 2016. If you split up the Philly Fed index’s growth rates into the 1st half of 2016 and the 2nd half, the story looks a bit different. 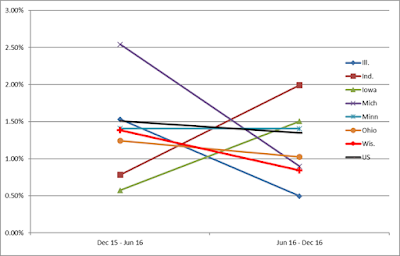 Look at how states like Wisconsin, Illinois, Ohio, and (especially) Michigan saw their growth fall over the last 6 months, with Wisconsin, Illinois, and Michigan falling below 1%. The US fell as a whole by a smaller amount (1.35% vs 1.51%), Minnesota stayed around 1.4% for both halves, and Iowa and Indiana bounced back after bad 1st halves.

But that’s just the last year. If we go out to the last 6 years, which covers the time period when many new Republican governors and legislatures rose to power, we see that the 3 Midwestern states hit worst by the Great Recession (Michigan, Indiana and Ohio) had the greatest snap-backs of growth under the Obama Recovery, although their growth rates have slowed in the last couple of years. But also cast your eyes to the lower end of the chart, and take a look at that red line. 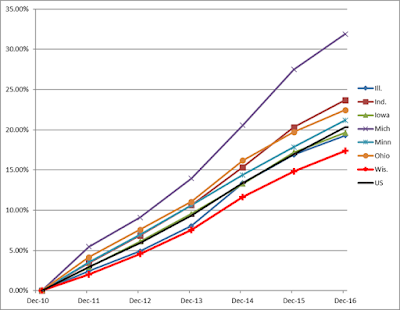 That’s “national model” Wisconsin under Scott Walker, taking up the rear in the Midwest, and even finishing below the dysfunctional train wreck in Illinois. In fact, Wisconsin has been dead last for cumulative growth in each of the 6 years that Scott Walker and WisGOP have been in power. And with stagnant population growth, underfunded schools and colleges along with deteriorating roads, explain to me how that’s going to turn around in 2017.

And yet Walker is running around America and making media appearances trying to claim that Wisconsin is some kind of leader that the Trump Administration should copy, to the point that he flew out to DC this weekend to hang with President* Trump, VP Pence and his old WisGOP buddy Reince? Maybe GOPs could look to Wisconsin when it comes to consolidating power, developing a media propaganda machine of alternative facts, and legalizing corruption on an unprecedented level (that does seem to be their main emphasis these days). But we sure aren’t the ones to follow if Trump is serious about raising the wages and economic fortunes of the many downtrodden white guys who voted for Trump to “Make America Great Again” for less-educated blue collars like them.

Makes me wonder what Trump’s “economic speech” in Milwaukee is going to be about this week. Is he going to again remind people how badly things are going in the state under Walker, like he did two years ago (after which Walker’s presidential campaign collapsed)? After all, the lagging economy in Midwestern ALEC states like ours helped get Trump elected! And what will Trump say he can do which will somehow change that bad direction?

I think some enterprising media and Wisconsin Democrats should bring up those subjects and ask about that in the next few days, don’t you?
Posted by Jake formerly of the LP at 5:34:00 PM