While gun violence and the Trump-Russia indictments have rightfully taken center stage in recent days, there's a continuing trend in the bond market that's also caught my eye this week.

The first indication came from this report by Yahoo! Finance yesterday. And the GOP's tax cut bill in DC is a big reason behind the news.

The government auctioned $51 billion of three-month bills at a yield of 1.64 percent, 6 basis points more than similar-tenor notes sold on Feb. 12. The amount of bids the sale attracted relative to the volume of bills on offer fell to 2.74, the least since Dec. 26. The Treasury also sold $45 billion of six-month debt at 1.82 percent, compared with 1.785 percent at the sale eight days prior.

The market is being hit with a deluge of T-bills following the recent U.S. debt ceiling suspension, and that’s helping to push up the rates that borrowers demand.

Concerns about the U.S. borrowing cap had forced the Treasury to trim the total amount of bills it had outstanding, but that’s no longer a problem and the government is now busy ramping up issuance. Financing estimates from January show that the Treasury expects to issue $441 billion in net marketable debt in the current quarter and the bulk of that is likely to be in the short-term market.

I’ve previously mentioned the runup in the benchmark 10-year note during the first 7 weeks of 2018, but this shows how short-term rates are also jumping, which you figure is going to hit credit cards and other revolving debt sooner than later. And that $1.50 or $20 you may be seeing from the tax cut won’t mean much if it costs $40 more a month to pay for things bought on credit (and buying on credit is a significant part of our economy, like it or not).

Then today, short-term rates kept climbing, this time in the 2-year note, as CBS Marketwatch noted this morning.

Short-dated Treasury yields climbed, but longer maturities held steady, on Wednesday as investors awaited an account of the Federal Reserve’s January monetary-policy gathering for clues about the pace of rate increases in coming months and the central bank’s outlook for inflation.

The two-year note yield, the most sensitive to the vagaries of interest-rate expectations, climbed 3.9 basis points to 2.266%, versus 2.227%, extending its highest level since 2008, and putting the short-dated bond on track to market a seventh straight yield rise. The rate for the note has climbed 12.5 basis points from 2.141% at the start of February….

Against that backdrop, rates have been marching higher, amid an expected onslaught of bond auctions, which can have the effect of exacerbating yield moves. The Treasury Department will auction off $35 billion of five-year notes on Wednesday and $29 billion of seven-year notes on Thursday. The sales are slightly larger in accordance with February’s refunding announcement.

Expectations for greater issuance to fund the government’s spending plan has played a part in driving bond prices lower and yields higher.

You can see how the yield curve has "flattened out" in the last year, courtesy of this visualization from the "Bond SuperMart" 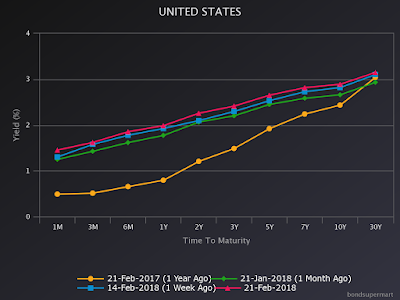 And sure enough, the Federal Reserve indicated that interest rates should continue to go up in today’s release of the minutes of last month’s meeting. The Fed said that being near full employment, and rising inflation in recent months.

"Members agreed that the strengthening in the near-term economic outlook increased the likelihood that a gradual upward trajectory of the federal funds rate would be appropriate," the Fed said in the minutes.

It added that recent information received by voting members on inflation "along with prospects for a continued solid pace of economic activity provided support for the view that inflation...would likely move up in 2018."…

The Fed's preferred measure of inflation has been below its 2 percent target rate for nearly six years but the Labor Department reported earlier this month that underlying consumer prices posted their biggest gain in more than a year in January.

"Almost all participants continued to anticipate that inflation would move up to the...2 percent objective over the medium term as economic growth remained above trend and the labor market stayed strong," the minutes said.

Those minutes caused the yield on the 10-year note to jump again this afternoon to 2.95%, a march of nearly 90 basis points in the last 5 ½ months.

The stock market originally bumped up for the half-hour after the Fed released its minutes (due to the good economic outlook?), but then promptly took a dive as the interest rates kept going up, with the DOW Jones losing over 400 points in the last 90 minutes of trading and ending down 167 points for the day.

Given that our stock market Bubble has deflated some in the last month, and that saving more money seems like a better idea for the near future due to the higher rates, it sure makes me wonder where our economic growth is coming from. If real wages continue to fall due to higher inflation, and corporations decide to continue to buy back stock and lay off employees to "make their numbers", combined with our rising deficit increasing what we have to borrow, that’s not really a good prospect for anyone. Well, other than coked-up hedge funders and CEO slime.
Posted by Jake formerly of the LP at 6:10:00 PM