It slipped out without much notice, but the year-end numbers from the “gold standard” Quarterly Census of Employment and Wages came out on Wednesday. And it closed the book on an awful 8-year record of job growth for Wisconsin under Scott Walker.
If you dig into the QCEW’s always-great map function you can see they only have it on a statewide and large county basis for now, but it allows us to see how Wisconsin compares to other states.

And 2018 was as bad as any during the Age of Fitzwalkerstan. We ended up 39th in the country in total job growth for 2018, at 0.60%, well behind the US rate of 1.5% for the year. And it continued a declining trend in Wisconsin’s numbers that we’ve seen for much of the last 3 years. 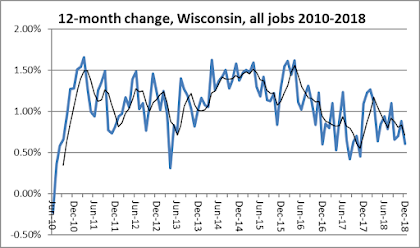 Also noteworthy is that not one state in the Midwest was near that US rate of job growth last year, which means Wisconsin ended up in the middle of the pack for our part of the country, despite that 39th place standing.

Those numbers aren’t a good sign if you’re Donald Trump, when you need the Midwest to buy into your talk of a “booming economy” to have any chance of getting re-elected in 18 months (if Trump is even a candidate in November 2020).

If you look at Scott Walker’s full 8 years, it shows that Wisconsin fell well short of Scott Walker’s promise of 250,000 jobs…despite getting 4 more years to get there. But you know who did blow past that number? Our neighbors to the west in Minnesota, who had more jobs than Wisconsin did by the end of the year, and added nearly 100,000 more jobs than we did over the 8 years Walker and WisGOP ran the state.

In looking at the 8-year record, Wisconsin falls to 5th in the Midwest for the rate of job growth, only beating the train wreck of Illinois and Iowa. Which makes me repeat a question I’ve asked many times in recent weeks. “Why does WisGOP want to keep us on this losing track?”
Posted by Jake formerly of the LP at 11:42:00 AM