You know that "Trump boom" in manufacturing? It's over, especially in the Midwest.

One theme that Donald Trump is going to try to promote for his 2020 campaign is that "our economy is great and I brought factory jobs back for the forgotten [white] man." And for the 2017 and 2018, he might have had a point, as tax cuts and low unemployment assisted in a deficit-fueled bump in GDP growth, as well as in manufacturing employment. 190,000 more manufacturing jobs were added in 2017 and 264,000 more in 2018, which made last year the best for job growth in the sector since 1997.

But that Bubblicious uptick in manufacturing appears to be ending. For example, IHS Markit said yesterday that new orders were at their worst levels since the economic expansion began in 2009, and that we declining toward the flatline of 50 in the monthly Purchasing Managers’ Index.

At 50.9 in May, down from 53.0 in April, the seasonally adjusted IHS Markit Flash U.S. Composite PMI Output Index indicated the slowest expansion in overall business activity since May 2016. The composite index is based on original survey data from IHS Markit’s PMI surveys of both services and manufacturing.

The muted rise in output was attributed to softer demand conditions and subdued growth of new orders. The rise in new business in May was the softest recorded since the series began in October 2009.

Consequently, firms put the brakes on hiring. The latest increase in employment was only marginal and the smallest for just over two years. Companies also noted little strain on capacity due to weak demand, and reported the first decline in backlogs of work since June 2017.

Input price inflation eased for the third month running in May, despite continued comments from panellists regarding the ongoing impact of tariffs. The slower increase in costs and greater competitive pressures underpinned a renewed fall in output charges, the first such decline since February 2016.

As you can see, there's a decent correlation between the fates of the PMI index and the US economy as a whole. 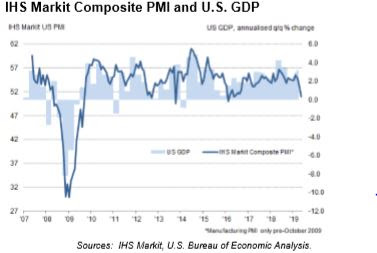 And IHS added in the same report that the services side of the economy wasn’t much better.

The seasonally adjusted IHS Markit Flash U.S. Services PMI™ Business Activity Index posted 50.9 in May, down from 53.0 in April, to indicate a notable slowdown in service sector business activity. The upturn was only marginal overall and the slowest since the current sequence of expansion began in March 2016.

Those slowdowns mirror a report from the Census Bureau on Friday that said manufacturers saw business drop across the board to start the 2nd Quarter of 2019.

Shipments of manufactured durable goods in April, down three of the last four months, decreased $4.0 billion or 1.6 percent to $253.3 billion. This followed a 0.5 percent March decrease. Transportation equipment, down four consecutive months, led the decrease, $3.7 billion or 4.1 percent to $85.8 billion.

University of Wisconsin economist Menzie Chinn noted recently in Econbrowser that manufacturing output has declined for much of this year and employment had leveled off in the sector in 2019, with the Midwest starting to see job losses. 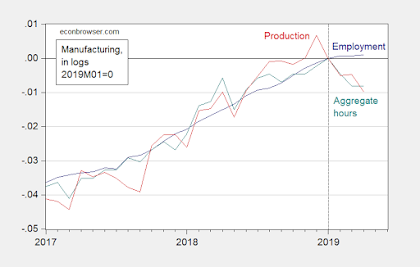 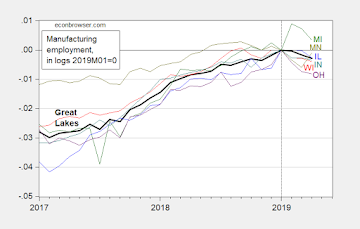 None of this is a good sign going forward, and that calls to mind where we were in much of 2016, when manufacturing output and employment was showing some job losses (including 51,000 between January and May of that year), and ended up being the only year that the US has lost manufacturing jobs in the 2010s. That manufacturing slowdown likely played a role in convince some blue-collars in the Heartland take a chance on Donald Trump to turn around their flagging fortunes.

Now we flash forward 3 years, and the 2016-type slowdowns in manufacturing and the Midwestern economy as a whole are starting all over again. Except now we have a higher US budget deficit, with less room for upside as unemployment is likely as low as it can get, and more trade restrictions and adjustments are coming in the near future. Ruh roh.
Posted by Jake formerly of the LP at 11:05:00 AM