We found out today from the Congressional Budget Office that the US's deficit and debt will keep growing to record levels in the 2020s. Including this fiscal year, where the CBO now agrees with the White House and says the deficit will top $1 trillion.

CBO estimates that, in 2020, the federal deficit will reach $1,015 billion, which is $31 billion more than the shortfall recorded last year. Relative to the size of the economy, this year’s deficit would be about the same as last year’s shortfall—4.6 percent of GDP—which is the difference between revenues equal to 16.4 percent of GDP and outlays equal to 21.0 percent of GDP.

This chart shows that these updated deficit figures for next year are a bit above what the CBO projected this time last year, but it's also not as bad in the medium term as the CBO projected in August. However, the deficit projections for 2025 through 2027 are higher than they've ever been. 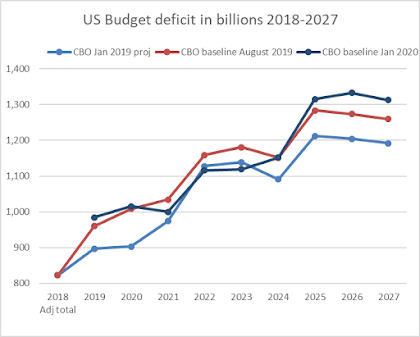 And the CBO's last point about the expiration of the 2017 GOP Tax Scam is worth remembering. The deficit and debt will be notably higher if those tax cuts are allowed to continue. Later on in the document, the CBO says that if those tax cuts are allowed to expire in 6 years, it means an income tax hike of around 0.8% of GDP, or around $220 billion. Corporations will also have to pay more after 2025, around $25 billion from what I can tell, which doesn’t seem like much until you realize that corps only paid $230 billion for all of 2019.

But remarkably, as the chart above shows, the CBO says the increase in taxes after 2025 wouldn’t stop the growth of the deficit or debt. The deficit would rise to $1.3 trillion over the last 5 years the Tax Scam is in place, and then go higher from there once the Tax Scam is gone!

The reason why this happens? Higher spending, particularly in the areas of Social Security and Medicare.

In particular, notice how the “Major Medical Programs” more than double between 2019 and 2030? This is what makes complaints about Medicare for All’s cost absurd to me. Taxpayer costs for health care are already going to go up by a lot if we do nothing, so why not cover everybody and stop having people be tied down to their jobs because of health benefits? And this doesn’t even count the rising increase in out-of-pocket costs, which employers and private insurers will gladly push onto individuals in the coming years.

These rising deficits mean that our national debt will be considerably higher than the $22 trillion that we reached last year,
and the $23.8 trillion the CBO says it will be at by the end of the 2020 Fiscal Year, reaching $36 trillion by 2030. 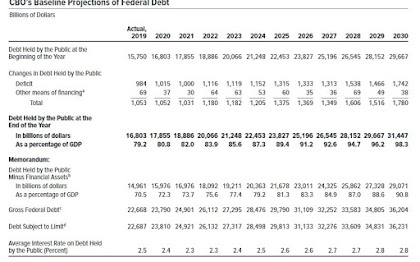 But you'll notice that the CBO doesn't anticipate that all that extra debt will raise interest rates all that much, even though Uncle Sam has to encourage someone to buy all that debt. If those rates get higher, then our projected deficit will also get higher due to the increased interest that has to be paid to those who hold that debt. But since our exploding deficits haven't raised interest rates so far (in fact, it's going the other way), maybe that part of concerns over our deficit isn't that bad for now, and the future.

But the other long-term problem that the CBO reports hits on in this report is that the country’s aging demographics and slow population growth are going to limit the amount that the economy can grow by in coming years.

Adjusted for inflation, GDP is projected to grow by 2.2 percent in 2020. From 2021 to 2030, output is projected to grow at an average annual rate of 1.7 percent, roughly the same rate as the economy’s maximum sustainable output (or potential GDP), which is determined by factors such as the size of the labor force, the average number of hours worked, capital investment, and productivity growth.

So barring some kind of major jump in the country's birth rate or immigration (both unlikely in the short term), we're not going to be able to grow our way out of rising deficits and debts.

No one wants to deal with that reality now, especially the Republicans who turbo-charged the deficit numbers in the last 2 1/2 years by both their GOP Tax Scam, and by increasing government spending both on domestic programs and the military. But this reality is likely why President Trump is saying he will likely mess with Social Security and Medicare should this country be dumb enough to keep him in power, and why any Dem that replaces Trump will likely be met with a ton of bad faith from the same GOP that caused the fiscal problems in the first place.

Everything is being put in place for Wall Street, The Chamber of Commerce and the GOP to pivot to full deficit panic and calls for the austerity THE DAY AFTER a Dem is elected. Mark it. https://t.co/5oeShxGlu0