Rick Romell, who is reportedly being pushed out due to another Gannett bloodletting at the Journal-Sentinel, decided to give the facts to the public on his way out the door in an article titled “More signs emerge that the pace of Foxconn's Wisconsin project is falling short of expectations.”

Tables in an attachment to the application show estimated investment of $3.3 billion by the end of 2019. Included in that is an estimated $2.1 billion in construction spending.

Foxconn’s own statements suggest it isn’t close to hitting those numbers.

In recent news releases, including one issued Thursday, Foxconn says it so far has awarded about $370 million in construction contracts at the Mount Pleasant project site. That would be about 17% of the $2.1 billion construction spending estimate contained in the application referenced by the state contract.

And while Foxconn exec Alan Yeung is claiming things are fine with the Foxconn project in Wisconsin and is promising more will come, Romell notes that the reality on the ground looks very different. Especially when it comes to an alleged partnership with UW-Madison that was announced before the 2018 elections.

[Yeung] also said the company was planning the Foxconn Institute for Research in Science and Technology on land east of Highway H. With Foxconn planning to finish the building for occupancy in January 2020, title to the land “will need to be transferred to Foxconn, and improved roadway access will be required by that date,” Yeung wrote.

But the land where Yeung said the institute would be built, southeast of the Braun Road-Highway H intersection, still stands vacant. And according to Racine County real estate records, Foxconn hasn’t yet acquired the land.

Plans for the institute surfaced in August 2018 as part of the unveiling of Foxconn’s partnership with UW-Madison, a partnership best known for the company’s pledge of $100 million to the university.

Foxconn’s donations to date stand at the previously reported $700,000, university spokesman John Lucas said Tuesday by email. He directed questions about the research institute to Foxconn. 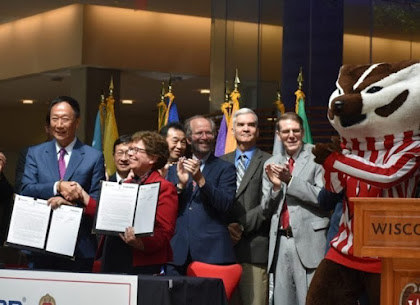 Nice photo op. Hasn't worked out so well, though.
Who would have thought that this would turn out to be pre-election BS, where Foxconn is glad to take UW students on as interns and get an inside track for recruiting them, but puts up very little to improve the UW?? Well, anyone with a clue as to how Foxconn loves to take without giving.

One other sign that this thing isn’t going to be nearly what was advertised 2 ½ years ago is that Romell tells us that Foxconn hasn’t even taken on a sizable amount of the land that the Village of Mount Pleasant bought/took from homeowners in the area.

Foxconn also has yet to receive title from Mount Pleasant for about 244 acres at the west end of its project site, although a November 2018 agreement between the village and the company called for the land to be transferred by July 2, 2019.

Asked why Mount Pleasant hadn’t transferred the land as called for in the agreement, Claude Lois, the village’s project director for Foxconn, said in a statement that the land would be conveyed to the company “as it is needed and once we’re sure they are prepared to improve it.”

And if Foxconn cuts and runs, good luck to Mount Pleasant on getting their money back in a time when they’re already restructuring and adding debts to pay off the hundreds of millions they’ve already borrowed for this white elephant.

But watch for Foxconn to try to claim it had 520 employees by the end of December in order to get its 17% payback for 2019. Take a look at this PR tweet from late last year.

Have never seen many cars at the multipurpose building since it was built more than a year ago. Until 12/21 when the lot was overflowing. pic.twitter.com/gjieKhSi1b


Remember that the Foxconn contract only cares about number of employees working at the end of the year. It does not care whether those employees are temporary, or if they are let go this month. You can bet that Foxconn will try to keep up these kinds of appearances of growth in 2020, to help President Trump and his GOP allies in Wisconsin.

But more seem to be catching on that Foxconn's "jobs stimulator" in Wisconsin isn’t going to be much beyond another warehouse project, except it has much bigger incentives and infrastructure giveaways than your typical WEDC warehouse project. And it seems quite telling to me that Rick Romell gave this honest assessment in the Journal-Sentinel right before he gets bought out, as he doesn’t have to be part of the corporate media’s pro-Foxconn charade any more.

It’s time we turn up the pressure and spotlight throughout the year, and if Foxconn continues to deceive the public and not give the Evers Administration information that is part of their oversight as stewards of tax dollars, then CUT THE CORD.
Posted by Jake formerly of the LP at 6:03:00 PM