Unemployment claims may be lower, but are still at record levels. And a damaging Winter is looming

As stimulus talks continue to drag in DC, the jobless picture is showing slight improvement in late October. The good news is that new claims appear to be falling, albeit with a few caveats.

The number of Americans who lost their jobs and applied for unemployment benefits in mid-October: 787,000, a pandemic low. But the decline stemmed in part from fewer new claims in California after a temporary applications freeze. https://t.co/kxpjQwyXKa

That new data from California came after concerns over fraud and a backlog in claims, and the US Department of Labor reacted by assuming Cali had the same amount of claims that it had in mid-September. That data got updated for those 3 weeks in this report, and it turned out that California's layoffs were going down, which made the nationwide totals get revised down. Revisions to unemployment claims after Cali data Initial Claims Sept 26 794,000 (-55,000) Oct 3 767,000 (-78,000) Oct 10 842,000 (-56,000) Oct 17 787,000 (adjusted, we think) So the 787,000 initial claims is not a pandemic low, and really isn't very different than what we had 3 weeks ago. And we can't forget that these "improving" numbers are still higher than the Great Recession's high mark of 659,000 new claims in a week, or the pre-2020 record of 674,250 in October of 1982. And this doesn't count the PUA program, which also benefitted from revisions showing lower claims from California (which has a disproportionate amount of PUA-type work), but we still had between 337,000 and 379,000 new claims for each of the first 3 weeks of October. On the continuing claims side, the better news out of California dropped the totals by several hundred thousand in both regular claims and in PUA. This means that instead of seeing 25 million total claims a week, it's more like 23 million. And if you take out 3 odd weeks of PUA data for California in August (you can see it pretty clearly in the chart below), it looks like a gradual decline in claims since the peak was hit in June. 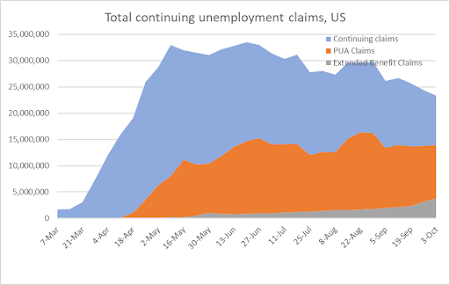 But you can also see ther gray area get bigger in recent weeks, which is indicative of people who have had their regular 26 weeks of unemployment run out, and have to go on to Extended unemployment. This number went up by another 600,000 last week, and is now near 3.75 milllion Americans. 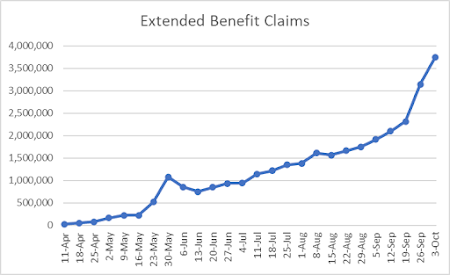 That's the bad news in this week's jobless claims report, and it feels like more is coming. Maybe that's because I'm in Wisconsin where the weather has turned especially cold and gloomy in recent weeks while COVID cases continue to climb to new records, which is causing numerous restaurants in my town to take the unprecedented step of closing for the season. This story starts with Rockhound Brewing owner Nate Warnke describing why he has to close his business, which is coming after CARES and PPP funds ran out from DC, and it has little to do with Dane County's reduced capacity requirements.

“It’s not an economic environment or a political environment for a business like mine to stay open,” Warnke said. “The government can’t get its stuff together. We can’t control the pandemic, and it’s getting worse in Wisconsin. I’m looking at it, going ... this might be the right time to gracefully exit, before I run out of cash.” It’s small comfort to Warnke that he and Rockhound are not alone. Beloved breakfast spot Manna Café on the north side, elegant Graft on the Capitol Square, Charlie’s on Main in Oregon with its hidden speakeasy and the family friendly Italian spot Vin Santo in Middleton — all have been casualties of COVID-19. Some, like Pizza Brutta, decided to close one location (Middleton) and focus on others (Monroe Street). Some chains — Hopcat, Doolittles Woodfire Grill — left the area. Still others have decided to close for the winter and take stock again in the spring.

Taverns in Madtown are just as stressed.

Locally, some taverns are calling it quits for now. The Ohio Tavern announced it would close after Oct. 25 “to reexamine and hopefully reimagine the service we are able to safely provide.” Genna’s, downtown, plans to close for the season as well. Ben Altschul is a partner in eight businesses around the city. Most of them, including Busse’s Tavern, Tip Top Tavern, Mickey’s Tavern and Porter Coffee/Bandit Tacos, will close for the winter.

As I write this, Badger football is set to kick off in Camp Randall in 2 hours. Not only am I not going to the game, me and about 100,000 other students and fans aren't tailgating downtown at this moment. And with COVID seeming to get worse by the day, I don't think I'll be in a position to head downtown for Game Day at any time during the abbreviated 2020 season. This helps explain why I'm not buying the Trump campaign's attempt (via local radio ads) to claim the economy is back on its feet with nothing to worry about. Because any honest assessment would make it obvious that things aren't close to normal in the country's economy, and with Winter coming, the pandemic still hanging like a dark cloud, and no stimulus dollars coming out of DC, there's not much to help us get back toward normal any time soon.
Posted by Jake formerly of the LP at 5:07:00 PM