A few reactions to today's updated GDP reports for Q2 2022, as well as the couple of years before it. Unlike what some predicted, real GDP still went down by the same amounts that were previously reported for the 1st Half of 2022 (-1.6% in Q1 and -0.6% in Q2). But the growth at the end of 2020 and for all of 2021 was revised higher, so the recovery from the COVID-19 cutbacks was even stronger than we knew. On the flip side, Gross Domestic Incomes (GDI) was revised down, indicating that wage growth wasn't as huge as previously reported. 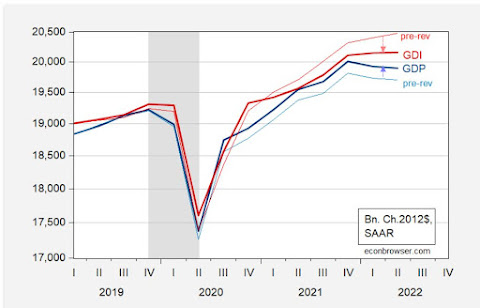 The lower incomes did not translate into less consumer spending, which means that Americans were saving 1/3 of the disposable income that they were saving in mid-2021. 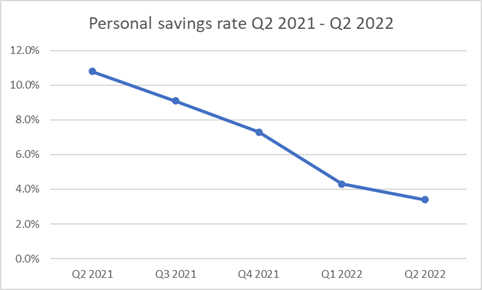 I got your f***ing inflation right there! Maybe that's what we should try deflating and dampening, instead of having Jerome Powell try to inflict some economic pain on working people. These figures also make me wonder if the Fed is spending too much time looking at what happened in the past instead of looking at the present situation, and figuring out what their rate hikes will do to the future economy. Which makes me seethe at the end of Q3 2022, as I wonder what's so bad about an economy that is still seeing unemployment claims at 50-year lows.
Posted by Jake formerly of the LP at 8:05:00 PM