Wis urban areas got even bluer in 2022, and sticks got redder. But low MKE turnout also an issue

Now that the Wisconsin Elections Commission has certified vote totals from across the state, I was able to dig into the data and come up with some more findings from this month's election. The first is that the City of Milwaukee and Milwaukee County in general continues to make up less of the electorate in Wisconsin. The City fell to its lowest point yet, at less than 6.7% of all votes, well below the over 9% that they took a decade ago. 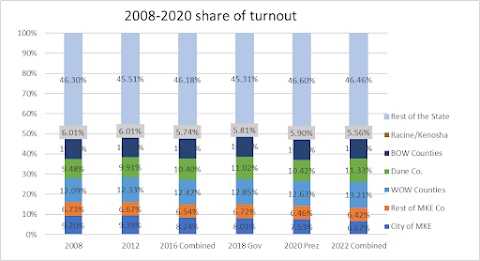 At the same time, both Tony Evers and Mandela Barnes got nearly 81% of the votes in the state's largest city, the highest levels in time frame shown. So if they could have kept up that pace (or even 75%) and gotten that 2012 or even 2018 turnout share, it would have given a bigger boost to both candidates. And likely would have knocked Ron Johnson out of the US Senate. On the other side, not only did Dane County take up its largest share of votes, Evers and Barnes both cleaned up there with the largest Dem share of Dane County votes in recent history (Evers 78.6%, Barnes 77.1%). Craig Gilbert of the Milwaukee Journal-Sentinel noted that this election continues trends that we have seen since Donald Trump first became the GOP's presidential nominee 6 years ago, where Democrats do better in urbanized areas, and GOPs have become dominant in rural areas.

Beginning in 2016, Wisconsin’s smaller and more rural counties have gotten redder and its bigger metropolitan counties have gotten bluer, reflecting a widening education gap, a widening gap between religious and secular voters, and a chasm between more densely populated places and less densely populated places..... Of the 15 counties that produced the most votes, 12 of them moved in a Democratic direction from the 2018 race for governor to the 2022 race for governor. Of the 40 counties that produced the fewest votes, 37 of them moved in a Republican direction. But the effects were not symmetrical. The vote shift in the 40 smaller counties produced a net Republican gain of about 17,000 votes over 2018. The vote shift in the 15 biggest counties produced a far larger net Democratic gain of about 87,000 votes. Most of this came from just three counties — the state’s largest: Milwaukee and Dane, which got bluer, and Waukesha, which got less red.

That's the gamble Republicans made in embracing the MAGA-dom - that they could win more of the vote in the sticks to counteract Wisconsinites in other areas that got pissed off by MAGA BS. In the Governor's race, that strategy failed big-time. In fact, Evers did even better than Biden did in 2020 in the WOW Counties, and also in the key Fox Valley cluster of Brown, Outagamie and Winnebago Counties (aka the BOW Counties). But it's noteworthy that Barnes got 2% less than Evers in both of these areas, which is consistent with the 4.5% difference in margin between those two candidates. 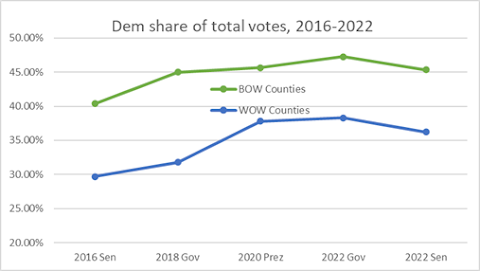 By comparison, in the 62 counties in the state that are outside of the top population areas, you'll see Evers basically got the same percentage as he did in 2018, but Barnes did even worse than either Hillary Clinton or Joe Biden did against Trump. 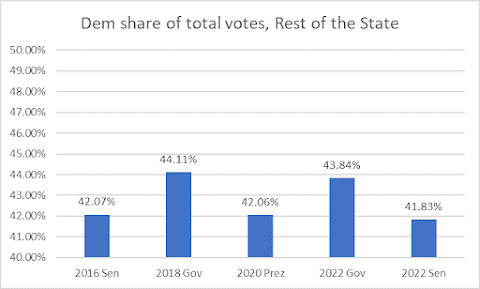 So RoJo's racist strategy peeled off just enough Evers voters to squeak by. But good luck sustaining that as MAGAts continue to die off and get replaced by 21st Century decency. And I'm betting outstate Wisconsin can't maintain 46%+ shares of the electorate in the near future, either. I now want to bring back this remarkable map, which compares Evers' margins in 2022 with how he did in 2018 (while gaining 2.4% statewide). You can not only see the changes we mentioned before, but you can see how Evers gained in counties with college towns (Eau Claire, La Crosse, Oshkosh), but fell behind in places that are filled with less-educated white people.

I think a lot of folks may consider that to be the case, yes — it is also home to UW-Stout, so some elements of a college town. Fwiw, Politico had outdated/incorrect numbers for Dunn, so this is updated pic.twitter.com/ePCxz4tRmx

And now Alberta Darling is retiring in an area of the Milwaukee suburbs that used to be big-time red, but has high levels of college-educated people and is moving rapidly toward parity between the two parties (especially the closer you get to Milwaukee).

Tim Michels, who underperformed in the Milwaukee area suburbs, won this district with about 52% of the vote: https://t.co/2Vw7L9LFNw

Along with the State Supreme Court election, this State Senate election in April will be our next sign of data to see if the Trump-era shifts in Wisconsin are permanent, or if there are some vestiges of the Scott Walker electorate that still exists.
Posted by Jake formerly of the LP at 8:03:00 PM